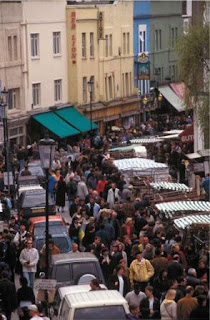 I haven’t been to Notting Hill much in the last couple of decades. It really isn’t my idea of , steadily in the eighties I saw it shift into some kind of interior suburb which really belonged to somewhere like , or . A place where the Home Counties equivalent of yoof settled to earn money in the city prior to returning to their vicarages and restored follys in Hampshire. Last weekend I found myself for various reasons in market.

Initial impressions were not good. The market teemed with European language students and those stalls and shops which are the sign of a market gone wrong proliferated. You know, the ethnic tat/faux craft stalls which first infected and moved on to . During the day I also saw plenty of the upper crust version of the same thing, those shops mercilessly parodied by Harry Enfield in his ‘I saw you coming’ sketches. Pretend dairies, over-priced fake enamel antiques, shades of bleach and skanky organic food. Despite the hordes of Spaniards and Italians the place had been completely deracinated. Ethnic cleansing is alive and well in . I’m not inclined to entirely criticize gentrification, an area dominated by one ethnic group is monocultural and creepy (and yes, South Lambeth and Tower Hamlets I am talking about you) however the near total disappearance of black and asian faces from an area I recall being very mixed is downright sinister.

However I did also find things to like, particularly that a few old fashioned traders were still hanging on. I found one vintage jewellery dealer with decent stock at decent prices. Towards the lower end, where it felt like it was still a proper market (less tourists, fruit and veg on sale) the food smelt good. For me however the best bit of the market was not on but at its finish, under the Westway where I saw several good stalls of vintage and second hand clothes. There was a particularly good range of mens suiting. Some of the small shops in the shopping mall were interesting. It also houses ‘What Katie Did’, for my money the best ladies lingerie shop in town. I’d wear their undies happily every day but on this occasion satisfied myself with a couple of pairs of tulle hosiery. This bit of the market I was quite happy with and will revisit.

What Katie Did Boutique.

Going back to the start of this blog though, the area in parts does not feel like . The attitude to fashion was interesting. The boho maxi dressed look, skinny limbs, long dry blonde hair and the tendency to wear dippy hippy headbands is not common elsewhere. It is an attempt to look urban that is a major fail. Festival hippy plus skinny blond rich bitch just looks, well, Notting Hill. And Notting Hill seems to me to be a fantasy version of . It does of course have lovely architecture, the white stucco terraces of the area, unlike those of Kennington and Clapham, largely escaped the Luftwaffe. On a sunny Saturday you could not help but envy the permatanned polo shirt and hankerchief top wearing bankers and corporates their balconies, high windows and champagne. I really don’t blame them. Before going to the event we had been drawn West to attend the bearded one and I had a drink in the just past Ladbroke Grove tube. A beautiful grand old place tartified by someone with rock chick pretentions. The pictures of various Stones on the walls could not stop it being what is was, a gastropubbed to the umph corner designed entirely to appeal to the urban pretensions of the innately rural types in the area. That didn’t mean I disliked it. Actually on a sunny afternoon the atmosphere of high-ceilinged, nicely wined, well heeled grandeur was pleasant. 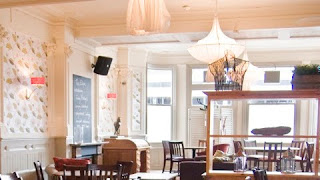 Interior of the Elgin Pub.

And I have to say the food looked really good. We spent the latter part of the evening in the Commander, another good looking gastropub. Here we had good company but very ropey service. So despite the fact I loved the general look of it I cannot recommend it.

There is probably a place for a bit of the Home Counties laced with an edge of Eurotrash glamour in . Pleasant enough for a wander, lovely houses, lots of good wine lists but still not the bit I would choose, under any circumstances to live in. If I could afford it better places would beckon. Still not half as bad I thought. 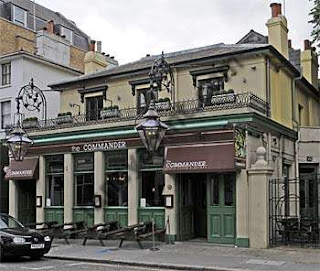 Exterior of the Commander.

Just discovered your blog recently, and this post made me laugh. When I read your post on the hell-maw that is Oxford Street on a Saturday, I suspected I'd found a kindred spirit; now that I've found someone else who tosses around phrases like "I saw you coming" and "fantasy version of London", I'm positive. May I offer, in turn, "Hoxploitation"?