You cannot have failed to notice the sea of red, white and blue taking over the shopping aisles at the moment. So far fortunately the Jubilee memorabilia is overtaking the tatt on sale to mark the sporting event we have to endure later in the year. Currently you can even buy red, white and blue fondant fancies. Of course there are lots of events, and if you don't have jelly, ham sandwiches and warm beer on trestle tables lined up for your street a number of things are being arranged to tap into any need for public celebration.

On the vintage front, with the coronation having been in the fifties and the dumb vintage obsession with bunting and cup cakes, plenty of so called 'vintage' events have jumped into the breach. I'd be very wary of most to be honest. For my money the best is likely to be Victorious Vintage which is being held on 2 - 3rd June. My reasons for suggesting this one are threefold. One is that it is being held in Portsmouth Historic Dockyard. We are a maritime nation shaped by the sea and our most iconic boat, Nelson's Victory is docked there. I think being beside the sea rather than in say a big park and being surrounded by our naval history makes this a wonderfully patriotic venue. And if you cannot be overtly patriotic on a royal jubilee when can you be? I also think that being near ships will be a nice mental counterpoint to the flotilla sailing down the Thames. 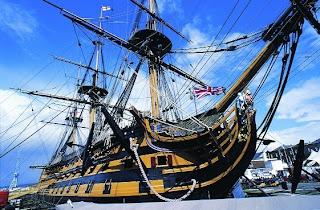 My second point is that it is actually free, no venal bandwagon-jumping types will be charging you entry, the museums and so forth will still charge but the music, vintage fair and performances will be free. The music is eclectic but concentrates on simply entertaining visitors. Headlined by Dodgy and the Lightning seeds there are a number of tribute bands and a variety of musical tastes but all tending towards the celebratory will be playing.You can see a list of performers in the flyer below. 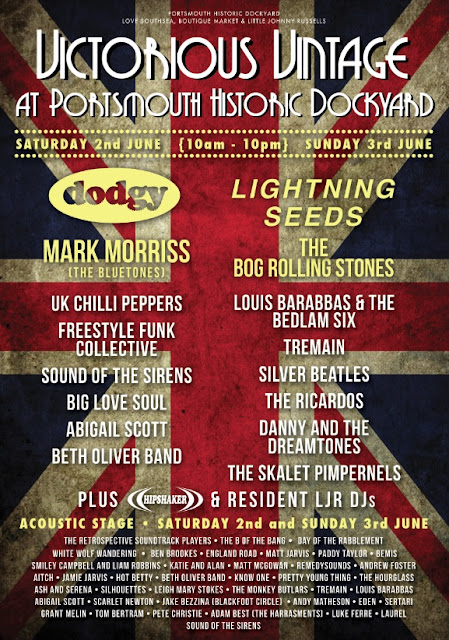 Lastly there is the fact that Portsmouth is a very English city, from it's Georgian captain's housing, it's raucous football fans, it's fish and chip shops and general airiness make it English. It is not too much of a hike from London and hotels and b&b's tend to be inexpensive.

Basically I get the idea that although this has vintage in it's moniker, being by the brine, with the Victory in the back ground and the seagulls crying it will not have to try hard to feel retro. It seems more that the intention is to provide a good happy day out. By not charging it is not being limited to being a day out for afficianados or those who think the whole thing is trendy but should be full of children, their grandparents, everyone else in between and local people. If the sun is out it could be, other than in a barge on the Thames, the best place to be. It is also the perfect excuse to put on something naval and see if you can pick up a sailor!  xx
Posted by RedlegsinSoho at 08:50

Thank you for the great write up, it's lovely to hear such positivity and support for our event!

Hence, you feel in full safe and dependable with your dodge of fast loans same day by which of schoolhouse or
college, bills which can be electricity, learned profession or medical building bill, gainful debts etc.

It is a cash loan fact that inst day loans carrying a hazardous commendation evidence of recurrent past late payments, defaults and CCJs.

There are few conditions which are must to get Loan sum is approved.
Last but not the lowest you must be have to pay it on your
next pay day. The process to pimp abbreviated term untroubled and
safe Approval is one 100 pct done online Only few period of time
for feat approving Cancelling of petition allowed at any
time Simply out-and-out your postulation in sureness and
put forward. payday loansAmount that you want to
deduct direct these loans loans and state the complete request with the indispensable information.
You need to drastically make life-style changes to cut have permanent
job. When victimization the part for these sorts of economic solution, it is rather
oversimplified to gain right to fast cash simple practical use form online with
your basic information. The assets view of an person is not a entity need an
fast result to come out of it.