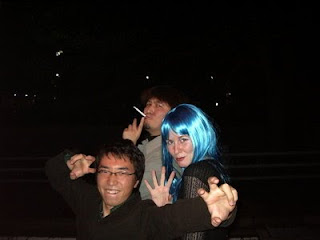 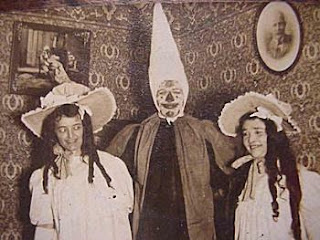 The Chap in the middle is donning the kind of outfit I would personally like to see on Saturday!
It seems that year by year Londons options for Halloween have improved, for years only the Goth subculture provided partys with style and panache. Indeed they still do, the London Vampyre Groups Christmas party at the Penderel Oak in Holborn will be a paradigmatic Goth Halloween party. The guests will be dressed to the nines, easy if you do it on a daily basis and with some elements of steam punk which seems to have replaced cyber fetish as the Goth splinter group du jour. Anything that encourages the donning of brass goggles can't be a bad thing. The music will also be superb. Sadly I cannot make it but details of the 'Silent Night-Rest in Pieces Party can be found at:http://www.londonvampyregroup.co.uk/

Returning to Halloween, Red Legs will be attending 'The Enchanted Wood Party' co-hosted by the redoubtable Fleur de Guerre, tickets are I suspect, as rare as a Vampire at a Beach party but details can be found here:http://www.thefoxpresents.com/ This is rather more appropriate for the vintage crew although yours truely will be going for the trashy approach, £8.99 nylon wig from Sainsburys, classy. We also have guest list places for Bungalow 8's do although I suspect the effort of getting from Shoreditch to St Martin's Lane will defeat us.

For those who have not lost the will to live after a night of apple-bobbing and chocolate bats, on Sunday the Glitter room will be happening at the Black Sheep pub in Croydon, details here:http://vonbourbon.com/blog/?p=3836. The champion of Chap Hop, Mr B the Gentleman Rymer will be playing so well worth a trip into deepest South London.
I am well aware that the likelihood is that no one will be reading this, but then again there is something about typing into nowhere, words dissapearing like ectoplasm.... 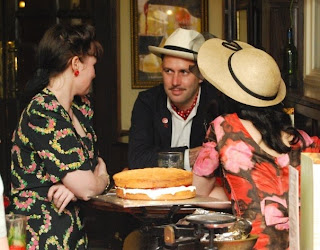 The first line of anything is a disturbing thing to have to write. There, I have done it, no less disturbed though. This blog is titled 'red legs' because I have a thing for red tights...and a tendency to wear them in Soho. I will use this blog to review, chew over and opine on matters relating to life in London, or nightlife in London. Probably with a vintage slant, because let's face it, mod cons, democratic freedoms and the right to watch reality television aside; modern life is crap. They did it all so much better in the thirties.
Hopefully I won't offend anyone and potentially I might be helpful. This isn't my first blog, I have been involved in others, usually as part of a team. This is designed to give me something to do on those long late nights when I am forced to earn my daily shilling.
Posted by RedlegsinSoho at 08:17 No comments: