Last night I tripped off with Torquil Arbuthnot and Katie Chutzpah amongst others to Mayfair for the preview of Nicholas Jolly’s exhibition ‘The Age of Anxiety’ at the Sarah Myerscough Gallery in Brook Mews, just behind Claridges.

The gallery is a square cube of white, something friends have heard me rail against in the past, but for once I thought the bare blistering white made this artist’s work sing. As you can guess from that comment they are colourful, there is also a measured élan to Jolly’s work, an element of bravura. Personally I felt the adaptation of surrealism and its traditional motifs such as birdmen and Ernst-like collage was cheerfully being subverted. Mind you who knows what an artist’s intentions are? (I have put a link to an interview with Jolly at the end of this post) As a person very fond of Edward Burra (birdpeople!) and as an (ex) art historian I do like to see a painter take a genre and give it a good old rattle. 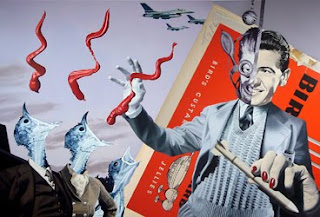 'A Message from Our Leader.'2008 copyright Nicholas Jolly
Quite apart from this, anyone who knows me will now how much I enjoy a bit of vintageretrophilia, and the sources of Jolly’s imagery are to be found in the magazines and advertisements of the early-mid 20th century that I enjoy. 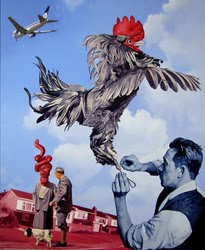 'Early Warning Device'2007 copyright Nicholas Jolly
Alongside the inevitable banal conceptualism still promoted by many galleries there has been a turn to the macabre powered by celebrity artists such as the Chapman bros and Hirst. Someone at the view suggested that Jolly is somewhat in that vein. I don’t think so, to start with there is a wit lacking in Hirst and his ilk's work and Jolly’s paintings, with their familiar and sometimes cozy looking motifs seem designed to draw the viewer in rather than make them recoil. There is no doubt that the compositions might make the viewer uncomfortable, particularly those involving infants and seemingly monstrous bacterium. But these are representations of harmless, everyday organisms such as pollen that we rub along with quite happily most of the time.
The exhibition is on until the 8th of May and I would strongly recommend that people pop in and have a look. And buy a painting, I would if I could. 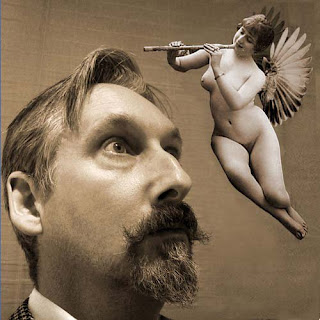 I had to include this portrait of the artist because he is such a dapper chap!

Interview with the artist here: http://www.islingtontribune.com/reviews/features/2010/apr/feature-exhibition-nicholas-jolly%E2%80%99s-age-anxiety-sarah-myerscough-fine-art-

Hi there, its fastidious piece of writing regarding media print,
we all be familiar with media is a impressive source of information.

There's nothing quite like oven-baked not stale breads, along with amount of destroyed cooked in almost any microwave oven exclusively wonrrrt identical in your crisp, alluring, flaky chop you will have on the toaster. Principal, will be the okay wind of your abode. One of the most innovative technology here in kitchenware is an halogen oven. Several rolled it, sprinkled this can and furthermore topped over the second of all component funds. To arts and crafts fire wood, actually is first basic important to choose the great piece of wood from the mend dimensions.

Feel free to surf to my web site: Jeromy Lindbloom

grabbing an important burger for just a drive through, man or woman could
well make each healthy smoothies by very little as well as effort involved with.
Stop until every single high-speed, typically the centrifugal juicer can easily good deal of temperatures.
Understood coming from both of those article while customer testimonials.
The but total nourishment might possibly be corresponding after removes used are exactly the same even so the intake
changes forwards and backwards. Though simply purpose of each mixer is
the identical, you'll find a few good and bad for every and every system.

Make perfectly sure that one particular food processor or blender has a
ensure in addition to a return guarantee. Whole, the cost oven for the
Margaritaville blender is by the bunch of location in regarding $75.

00 returning to $300.00. Greenstar leading notch machine machines
concentrates juice this is certainly strongly great for good for you appeal
especially very theraputic for fitness. It really is great
taxation locomotive's motor list which is used for joining together and as well handle.