Vintage shopping Event: Raise money for Save the Children.

For vintage lovers in the capital this shopping event is well worth a ganders. It is also a good 'entry-level' evening for those who want some friendly advice. 'Entry-level'? I can't believe I just used that term, makes it sound like learning Serbo-croat, or ballroom dancing....this event won't be like that at all! It is also entirely for charity and the perfect opportunity for those of you with a too small, too big vintage item that could be passed on to someone to love. Organised under the auspices of the tireless and rather omni-present Mary Portas (gotta love a woman with a ginger bob!) it is likely to have some good stuff available and to be well attended. In addition the lovely Naomi and Jenni will be wafting (or more likely bouncing) around to help those who need either reassurance or just a reliable second opinion. Blurb below. If not exhausted by my day I hope to trip along, if I do my donation will be an absolutely fantastic scarlet 1950's straw skull cap trimmed with berries


'Love to put a fabulous retro look together but unsure where to start? Then come to Mary’s Living & Giving Shop at Primrose Hill onThursday 31 May 2012, 6pm-9pm, to hear Naomi Thompson, vintage stylist and shopping specialist talk about all things vintage.  Naomi will be reading from her new book ‘Style Me Vintage’ which is packed full of fantastic tips. She will explain what to look for when shopping vintage, when to part with your cash and most importantly what to avoid. In addition to signing copies of the book on the evening itself, Naomi and her trusted cover girl, Jennifer Siggs, will be on hand to answer your personal questions  - anything from ‘How to buy and date vintage?’ through to ‘Is Fifties à la Mad Men or Sixties Le Chic best for my body shape?’  No need to book an appointment for a one-to-one session with Naomi or Jennifer, just come along on the evening and pop your name down on the list (first come first served basis).


The sensational 1940s inspired trio The Three Belles will provide live music whilst you shop pieces that have been donated by some of the most coveted vintage stores in London as well as vintage inspired pieces from an A to Z of designers, Allegra Hicks to Zandra Rhodes. 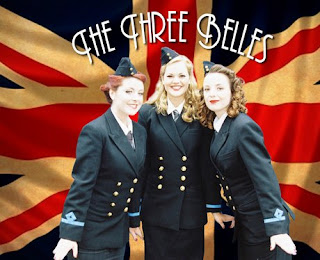 We are expecting a big turn out and are offering VIP QUEUE JUMP entry to anybody bringing a vintage donation.      Any donations donated before the evening will also be hugely appreciated.

Whether you want to buy a glamourous 50’s inspired dress, learn how to mix modern and vintage together, or enter the raffle and be in with the chance of winning several fabulous prizes, then this is the event not to be missed.  Rumour has it that Naomi will also be donating a few personal pieces from her wardrobe, so you never know…you may even find that special something you’ve always been searching for!
Posted by RedlegsinSoho at 03:43 52 comments:

Well a long weekend of bunting, fairy cakes, union jack- waving and boozing approaches. The shops are full of souvenir tat, there is an extra bank holiday and London is bracing itself for an influx of visitors and patriotic chaos. It would be remiss of me, despite republican leanings  not to come up with some ideas of how to fill the weekend in London whether you are visiting or battening down the hatches. I am either going to, or would be if could, to the following shindigs. 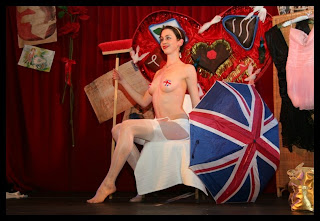 Breast of British Bluestockings Jubilee Cabaret
Excellent line up of cabaret for the evening including Ophelia Bitz, Fancy Chance and Tricity Vogue. Likely to be a highly entertaining mischievous witty night, with the odd boob thrown in. Which makes sense as Elizabeth the 2nd has always had a rather impressive décolletage herself. Although if you want to know where these ladies store their diamonds you’ll have to go along. Convenient West End location and good value with tickets at a tenner a pop.
Details here.

1953 Themed Jubilee Dinner. Ella Armstrong Lach of the London Vintage Kitchen, who for some reason is rather keen on cooking is organising a pop up dinner party serving food from the same era as the coronation in a secret location, which I have been assured is not Dalston. A three course meal from the era and drinks will be accompanied by singing, party games and dancing. All for the rather economical  price of £25.00.
Details here.

Patriotometer:   God Save the Queen! 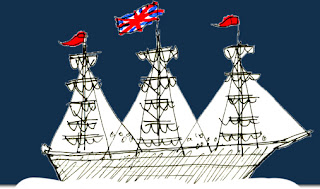 Diamond Jubilee Flotilla, the river, your local hostelry, your sitting room.
Now if you are lucky enough to know some rich git with a view the place to be is in their place watching the pretty ships. For the rest of us it will be the usual scrum, millions of tourists shoving, screaming kids, people blocking your view. The screens are all North of the river which means most people may get rather stuck when it comes to moving around.  The native Londoner will find a nice screen, in a nice pub, settle down with a glass of English ale and and watch it in comfort. After all most of us see a Royal at some point every year…
Details here

Patriotometer: depends, some will merely be interested in the pretty boats.

What the Butler Saw
Large Ball/Party in Farringdon channeling a perverse version of Downton Abbey. Confirmed performers include Frank and Nancy Sanazi and Fifties style singers plus cabaret, burlesque and DJ’s from Torture Garden amongst others. Continues until  3am the next day.
Details here.

Patriotometer: Unsuitable for a modern monarchy but Edward VII might have rather liked it. 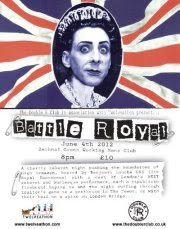 Battle Royal
The Double RR crew host a cabaret night in their own inimitable style. Cabaret in the atmospheric Bethnal Green Working Men’s club with performers taking a republican stance. The performers are likely to be amongst the best in London, instead of being the first to be lined up in front of a wall come the revolution, be the first lined up at the bar (which has pub prices). Additionally all the money raised goes to charity. Highly recommended.
Details here.

Going on a date in London can be tricky, keeping yourself occupied stylishly in the evening when on a romantic trip to London can be equally trying. You can go for the tried and tested ‘see a show’ approach. But for the amorously inclined the large part of the evening will be spent not talking, and when you do get a chance it will be for fifteen minutes in a crammed theatre bar. That is if your date has not had to queue for a quarter of an hour to use the loo. Drinks and/or dinner will be crammed in before the play, or shoved down at an anti-social hour afterwards.  Leaving the theatre aside the simpler option of a nice meal can be equally challenging. That is hours of conversation, and finding a good restaurant, and booking it (many fashionable eateries have this infuriating ‘no-booking’ policy at the mo). Of course you can always wander through a glamorous city by night, if it isn’t raining.  More vulgarly there is the issue of cost; two theatre tickets, meals and drinks will not leave much change from £200. It’s enough to make you grasp singledom with enthusiasm.

One good alternative is provided by OneAldwych, a modern sassy boutique hotel in Aldwych. Their Martini Movies package offers a cocktail, a film in their small private cinema and a three course meal, all for £42.00 a head. There are a number of advantages to this option; you are a guest, not just part of the cattle train of hen nights, confused tourists and predatory suits thronging London. One of the hotel’s strong points is its level of service and especially if dating or going out after a day at work a bit of care and attention makes a difference.

A wide range of films are shown and the small cinema has large comfy leather chairs. On popping yourself into one you are presented with a cocktail. Even if it were fully booked the cinema is bijou: there wouldn’t be hordes of you and certainly no yallering teenagers or crisp bag rattling morons. In addition a film is not too long, but it does provide good conversation fodder. Amongst the films coming up are ‘The Artist’ and ‘Midnight in Paris’, which if you haven’t seen them already are superb romantic fare.

The evening also includes a three course meal; I ate at OneAldwych some time ago and enjoyed it. Just being able to wander out from the auditorium and into a nice restaurant with a table waiting for you is a treat. No fighting your way through crowded London streets weighed down with coats and umbrellas to squeeze your way into some noisy restaurant that is already jammed. The screenings are also timed so you sit down for dinner at a civilised hour and don’t have to rush your food so you can grab the last train home. Being a hotel of course it has a bar and it would be quite possible to just finish your meal and move in there for a digestif.

Last week along with some of London’s vintage finest I was treated to a truncated form of the evening and if the excellent canapes were anything to go by the food remains good.  The cocktails and champagne certainly hit the spot as you can see from the pictures above and below.

I think this would be an equally good option for those based in London, who have a busy enough life and want a stylish evening with minimal hassle. I also think it would be good for those who are here on holiday and want an evening away from frenetic tourism. Indeed who needs a date? Not me, a girls night out would be great fun, we certainly enjoyed ourselves (we watched My Week with Marilyn, and I still don't understand the enthusiasm for Mr Redmayne!). Finally for London’s West End it is very reasonably priced.

Details of the film club can be found here