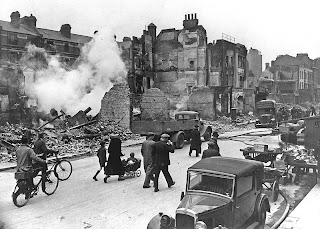 I’m referring to the Second World War. There is a lot of it about, and a lot of post-war austerity in television dramas and on the pages of novels. Is this because we need to be reminded during times of recession that things can be so much worse? It also occurred to me that this particular period has a peculiar resonance for my own, post baby-boomer pre generation-x demographic, are people my age behind some of this interest?

The baby-boomer generation were often children during the war; if not their own parent’s lives were often defined by it. I have always thought that the selfish, hedonistic, escapist sixties were partially fuelled by an “I am bloody sick to death of hearing about the bloody war” mentality. Who can blame our parents? How on earth were they ever going to compete with the toughness, suffering and downright chutzpah of their parents. After all how do you rebel against a generation who repelled the Nazis? The only answer is to reject the world they fought for, even though it may have provided the only kind of culture in baby boomers could freak out and drop out.

It was different for my peers and I. Not only were the sixties our parents’ era, and therefore profoundly old fashioned but their generation were busy making terrible mistakes in the seventies and eighties. I never felt I had much to live up to in terms of my parents generation. But what really makes a difference is that perennial generation jump that engenders a fondness between grandparents and grandchildren. Our grandparents all came from that Wartime generation, some even recalled the Great War. We’d hear first about the exoticism of wartime , how much fun could be had, the near-misses and practical jokes. When older we would hear of the horrors of the blitz, the lost, the injuries and the damaged. Your grandad might talk about tanks and machines but never the actual mechanics of fighting or your gran, like mine, would never be able to use a tube train or lift due to an experience of being buried alive. At the same time, although on a scale minute compared to the blitz, we were still being bombed by vicious cowards.

In the 70’s the remnants of the war were still also still around. The area next our tenement block (now part of the nine elms complex) was a bomb site. There were no ruins, but you’d still collect shiny bits of shrapnel and the odd bit of casing. There were other signs, the local little brick terraces had little low walls you walked along, but they weren’t walls, just the stone bases that had once supported railings. Old enamel street signs were peppered with singed holes and many terraces still had gaps or houses were shored up with huge wooden planks.

There are many retrophiles who revel in the romance, pugnaciousness and sheer style in the face of disaster that the home front represents. But I have always preferred the thirties. I suspect this is because I know that it is the hopes of the 30’s and the wish to preserve some elements of that glamourous but unstable world that drove my grandparents to persevere through bombs and barrages. 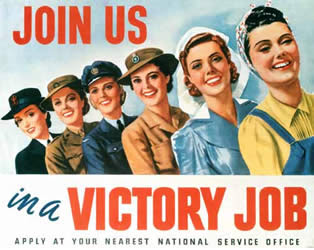 I can understand the enthusiasm for wartime music and fashion. Laurence Llewellyn Jones of all people, in promoting the 40's as the style decade for some banal programme made the very pertinent point that things and people often looked great despite austerity, squalor and suffering. Admittedly most newsreels show grubby grim shabby people but lipstick still found itself being worn, hair was permed. For me part of the glamour was the role of women as firefighters, munitions workers, radio operators or the tough heart of the home front. It seems more appealing to look back at them when you consider the vapid, thin, sex-doll image that seems to epitomise the ideal of women now. The glamorous stereotype of the war had nails, resources and indomitability.

But I still prefer the pre-war 30's stylistically and musically, I would have hated to have lived through the war, I lived through part of it, second hand through my grandparents and generally speaking it sounded horrific. 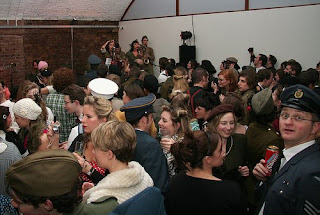 Revellers at the Blitz club in London copyright Clayton Hartley
Posted by RedlegsinSoho at 08:57

A super blog Minn! I enjoy learning about the war and often favour the WWII working girl look, but my heart lies in 1938-1941 American fashions, so very much more glam than the equivalent period in London. We were certainly more stylish in the mid-30s. I often wonder what fashion would have looked like if the war hadn't interrupted it.

It depends on the country too. I think very few people in Germany are fond of the 40s.... Same for Spain.

removed due to very bad spellings!!

It's easy to look through Rose tinted spectacles, my grand parents had a hard war. I now work with people who number, German soldier, British Soldier, occupied native of the Channel islands under German rule, evacueesetc etc, I could go on. I'm lucky to hear everything first hand from those who want to talk about it. Imagine building bunkers for the Germans, or getting hauled out of bed at 2am because someone cut the powerlines and forced to march for 4 hours not knowing if you'd be shot.

Yes, it's easy to be Romantic about a period in time in which we were not born into, yet shaped us all. I wouldn't have been created if it were not for the war! I'm happy to mention the war and my love for those who did everything they could in that awful period of time.

Great post! My interest in 1940s and postwar Britain is probably about 40% schadenfreude -- my mother was born during the war, and the book "Austerity Britain" is practically a catalog of the misery, grimness, privation, meanness and class warfare that led her to flee the UK to the States, where I grew up. I figure that to understand the war and the postwar austerity years is to understand a lot of what made modern Britain the way it is.

All that considered, I too find it amazing and inspiring that British women being bombed left, right and center and required to work the equivalent of 2.5 jobs still found the gusto to curl their hair, put on lipstick and face the world looking as good as possible. There are days in London when I can't rise beyond sweatpants, and I don't even have a war for an excuse.

In my opinion you are not right. Let's discuss it.

This is the joy or archives!!! I loved reading this post :) Sums up how I feel exactly - although I am very much drawn to UK fashion 1939-45.