When The Last Days of Decadence first opened I was impressed by the fact they asked some beautiful people such as the lovely Lawrence Gullo to adorn their opening. Sensible as the club's schtick is that it intends to recall the style and elegance of the past. The venue has made a visible attempt to revive this in their interior, utilising decorative glass, veneered walls and art deco flourishes. This is more successful upstairs where there is an element of ocean liner lounge about the place. Downstairs, (due no doubt to the exigencies of providing a stage, mc booth and dancefloor) is less atmospheric. I have been here a couple of times, and apart from problems dealing with serving drinks to crowds, always seemingly a set back in most newish venues, have always quite liked it. Last Saturday, along with Torquil Arbuthnot of The Chap, the ever-stylish Fleur de Guerre and her beau I dropped in on the venue's flagship night: 'Saturdays at the Last Days of Decadence'. 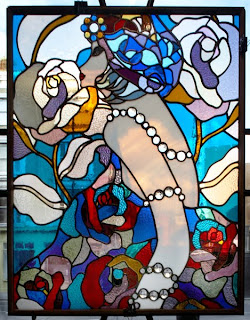 One of the venue's stained glass windows.

I did this with some trepidation. Not because of either the organiser who seems on the ball, nor due to the cabaret acts which have, I have noticed, been of a continually high quality. The thing I am always worried about is crowd control. This is because I possess a prejudice. I have come to dislike the typical Hoxton/Shoreditch/Bethnal Green type. Most are really young, so there is that unescapable problem: many but not all people under the age of 22 have nothing much of interest to say about anything. Then there is the 'look', it is just rubbish. That skinny jean, stoopid pork pie hat, poor attempt at a beehive ingenue geldof/chung/Lott look is really incredibly...boring. Oh, and then there is the general entitled boorishness and the poshness. So basically every sinew of this Londoner's body wants to scream 'back to the Home Counties Scumbags!' oh, and stop complimenting me on my 'costume', just because I know how to brush my hair. Can't tho..because then I am being rude. The problem is that this talentless demographic dominate the Easty areas (all the really fashionable are now in Peckham rumour has it, hmmm) and decadent style + Hoxtonite is an oxymoron. Someone had actually warned a chum off entering LDD (as I shall now call it) as the occupants would 'point and laugh' at him. 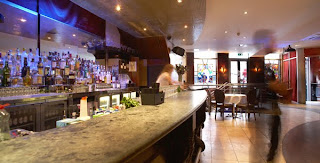 The upstairs bar at LDD.

Pleasantly, my fears were unfounded. I thought the crowd on this particualar night were polite and pleasant. Not all were dressed to the nines, which was a shame but Valentine's night shenanigans might have robbed to club of some of it's more flamboyant regulars. There was also that missapprehension that decadent retro = wrapping some type of ribbon or band around your head: flapper. But it is better than wondering around in in some crappy jeans and urban outfitter designed tea towel. Not good to be snobby but I can't help it however I thought a lot of the girls looked really sweet. I was also charmed to enter the place and find a pianist playing wonderfully, I was even happier to find that the first cocktail I received, a white lady, was well mixed. I also liked the proper table cloths and thought the door staff efficient and friendly, even though the group of girls in front of us seemed to be checking in all their worldly posessions! I suspect that they had changed in a toilet on the way. 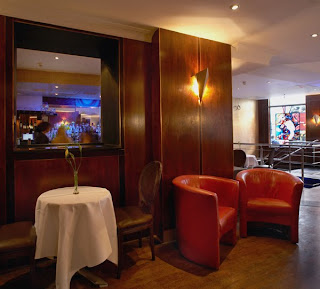 Seating in the upstairs bar.

The downsides were small and not uncommon. The choice of music played was spot-on, very good selection of 20's/30's/40's ditties; but wayyyy too loud. Once you have to yell at your companions any effort to be suave, louche or stylish is damned to failure, unless you are stranded on a sinking ocean liner. But this may be down to my advanced years. I didn't venture downstairs for the cabaret as I was familiar with the line-up, a good one again. It seemed ,when I poked my head down for a look, very crowded and lively so nothing wrong there. Sadly the cocktails chopped and changed in quality and speed of delivery once the bar was under pressure; all cocktails from a bar should be the same. But they were not cheating on the alcohol content, and I know how hard it is to produce cocktails at speed. A couple of bar meetings and that could be sorted. 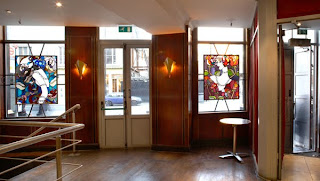 I'd summarise the evening as a worthwhile expedition from the West End, I think it is probably, in fact, the only worthwhile Saturday entertainment in the area. If you are brave enough to march your quiff/cravat/evening dress/victory rolls/sublime drag past some of the groups of young scruffy men from Guildford looking for 'edge' outside the other bars it's certainly worth an expedition. The quibbles were small, and this is as pleasant a place, and a lot pleasanter than many in Soho to spend the weekend. I think it is better suited to a party night out with friends than assignations. And those stained glass windows are terribly pretty. So all in all a thumbs up for this night and the club in general.

Hey very cool site!! Man .. Excellent .. Wonderful .
. I will bookmark your blog and take the feeds also? I am satisfied to seek out so many helpful
information right here within the submit, we need work out more techniques on this regard, thanks for sharing.
. . . . .

Usually I do not read post on blogs, but I wish to say that this write-up
very pressured me to try and do it! Your writing style has been surprised me.
Thanks, very great post.

Here is my webpage; http://wealthwayonline.com/evgenimalkinjersey.html