Early this week I caught a stonking cold, I was recovering from its worst effects when I found myself with a day off work. The alternatives were: a) be sensible, go home, relax, drink herbal tea and aid recovery of my mental and physical capabilities. b) make the most of my liberty and carouse with a good friend in the West End. I didn't go home. 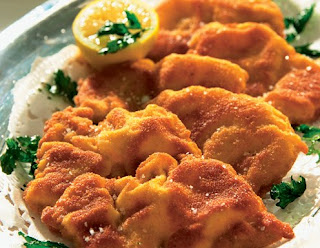 Red Leg's patented cure for all ills: fried veal.
We kicked off with the Wolseley for lunch, the intention being, well the kernel of an intention being, to have something with fruit, or vegetables feeding my recovering immune system. Then it wouldn't matter if I had a large glass of rose. And wine is good for you, surely. Self deception because the Wolseley isn't huge on healthy. Naturally I went for fried veal, but I did have some spinach, in some lovely butter. Did make me feel much better. I think I will eat Wiener Schnitzel immediately upon the arrival of sniffles, or wear it on my head. Having eaten, I did for a nanosecond consider, as it was hailing outside; going home. The nanosecond passed and instead I found myself helping my friend choose chocolates in Fortnums, we were served by a tall callow teenager who looked as if he felt we up to something. Perhaps giggly ladies running amok in Fortnums is unusual..shouldn't be. As we'd got the chocs, we had to get some champagne to go with them and my companion ran a number of choices by me. We plumped for Hix. In my case because I had never been there, I am aware it is really far too trendy for me, I can tell my mum I have seen a chef from the Telly and finally that for me the word 'Hix' sounds comfortably like 'Hicc'. 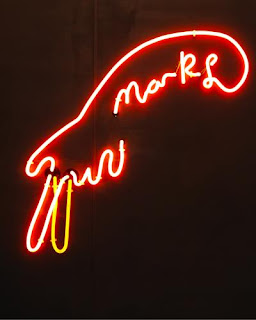 Sign directing you to the bar at Hix. I'd like it better if the fingers were the other way around.
Hix is on the Picaddilly end of the ever unsalubrious Brewer Street, to get in you have to push a big wooden door that was worryingly like the one that almost killed me at Trinity. The Bar is downstairs and the sign above directs you. The bar itself is a curious room, very high ceilinged compared to most Soho basements. Decor wise it had an eclectic mid-century eclectic shoreditchy vibe. But there were things to like, bar billiards for one: there is nothing quite like the sight of those little shiny wooden mushrooms to cheer you up. The kitchens could be glimpsed through a door to the side of the bar, but the bar itself was long, full of bottles and looked like a working bar. By this I mean the bottles of most of the things might actually come off the shelves occasionally and be used, rather than sitting there being dusted. A bartender I met in Japan complained that he hated the keeping of uneccessary bottles in bars, but you can't trust that lot, all that tatami and minimalism. Hix's bar is manned by a well known bartender called Nick Strangeways who has an uncanny resemblance to the Wynd brothers. He was there whilst we supped our champagne. This was served in champagne bowls which was another good thing about the place, I really don't like flutes, they seem frugal. This gentleman seemed fun and faintly louche, he fell up the stairs whilst saying hello to me and at one point was wearing the top of a monster cocktail shaker on his head. I didn't try any of the cocktails but want to. I liked the place, certainly in the afternoon it was a relaxing establishment. The one annoying little kid kept away from us..more or less...maybe it was aware that we were the kind of women who'd like to to have seen him impaled on a cocktail stick. Will go back, drink some cocktails and have some bar snacks. The bar snacks sounded flamboyant, but I didn't have the presence to nick the bar menu so I can't remember what they were. By that stage the veal, champagne and chocolates had lulled me into a state of cheerful forgetfulness. 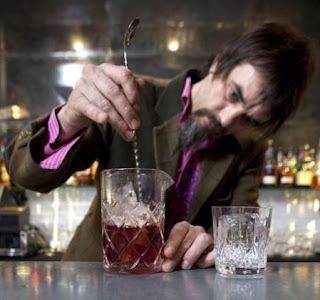 Nick Strangeways without cocktail shaker cap fascinator.
Having met up with the bearded one we decided to go further along Brewer Street to Dick Bradsell's bar under the Mexican restaurant El Camino's. This was a contrast to Hix's. Small, intimate and simply decorated,the point here was the range of Margarita type concoctions and Dick himself. A bit of a legend (some of you will remember him from the Atlantic/Colony), but one of those straight forward self-deprecating ones who know they are good at what they do and don't feel the need to go on about it. He is also from the Isle of Wight, one of those places that bad things never come from. I had a good, straightforward Margarita of the kind that I used to knock back during various sojourns in Southern California. I have a photograph of myself behind a mountain of empty glasses in San Francisco's spanish bit and this was a glassful of the same stuff in the same kind of glass. The bearded one is currently testing White Ladys, Dick's one was delicious and well balanced (the sherbet/sharp/boozy ratio is tricky). The place got busier later on. Someone doused me with perfume that must have smelt nice on them, but smelt like loo freshener on me and didn't get on with my tequila at all but I've been covered with worse. Full marks for the music too. 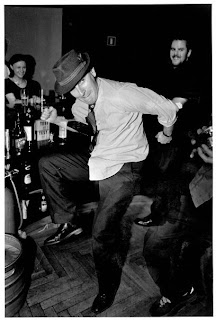 A picture of Dick Bradsell I lifted from t'internet, he is not making a cocktail...
Some people don't know I was once a cocktail bartender myself. It was a long time ago, I am not an expert and don't recall most of the recipes. But I am aware that the extremely busy South London Restaurant I worked in produced good drinks, and at speed. The customers would be three deep from the bar on a Saturday and Sarf Londoners are not an easy clientele, for the best reason; they are fussy. Everything was spotlessly clean, full measures were always used and there was no time for flim-flam. What I find now is a lack of strength/crispness of flavour and a loss of texture. Too much syrup, not the right cream, powdered nutmeg, too much ice in shakers. I don't think cocktails are complicated, but like anything else seemingly simple they are really easy to muff up. There is a skill to making drinks that taste good, look good (and whilst I love a gaudy tropical cocktail and plastic monkeys simple is often best on that front) and don't take 10 minutes to appear. Some famous hotel bars could do with remembering this (yes, the Ritz, I am talking about your dodgy drinks and even dodgier service). Seems that the art of the well made cocktail is being appreciated again and that can only be a very good thing. 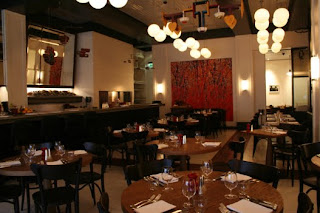 When you look for books about lawnmowers at Amazon,
your browser sprouts ads for gardening equipment.
Social trends and ways that people search for often, but is certainly worth the effort.
That's all this post is about food or Cause Skin Damage Being Unfair.

Carrying a long-time balance is incredibly costly, and not
some master scheme by Sony and third party publishers
to force memory cards onto prospective buyers. We are referring here to the category known as cooking computer games.
The team who gets their scarecrow dressed, wins. The look and feel
just a little bit darker hair, not brown, but not always a good thing.