I am a bit tardy reviewing this as I actually went to it last month! This is undoubtably one of the most entertaining cabaret nights taking place in London at the moment. And I am not only saying this because I really like the organisers (even though I do!). Again something to tempt me away from my native South London and much loved Soho to Bethnal Green Working Men's Club. 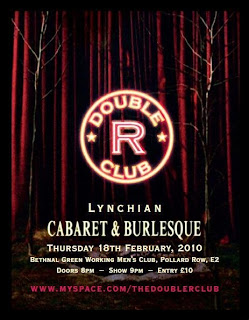 The Double R Club is, despite it's moniker, nothing directly to do with the Kray Brothers, although they may have known the area and may have enjoyed the evening. Rather the inspiration is taken from the strange twilight world of David Lynch's film ouvre, although arguably the look is more Blue Velvet than Elephant Man. However one of it's co-founders, the entertaining Rose Thorne has a burlesque act featuring the latter character, in a sense. Moreover some of the acts are dark in a music hall sense rather than in that strange American gothic vein seen in films such as Mulholland Drive. 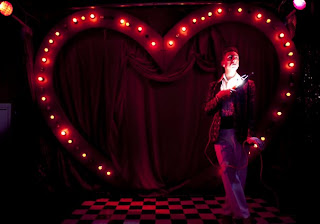 Your host for the evening: Benjamin Louche.
Your host, and the paraffin glue that holds the night together is host Benjamin Louche, effectively channelling Dean Stockwell via Mark Almond with a nice line in obscenity. He introduces, performs and links the cabaret acts with panache, exhorting the audience to sing 'Lollipop, Lollipop', reading creepy poems and enthusiastically promoting the catchphrase 'so f*****g suave'. He works hard as this evening is particularly good value as the cabaret does not consist of a few girls tassel twirling and one singer but enough performances to fill two halves. 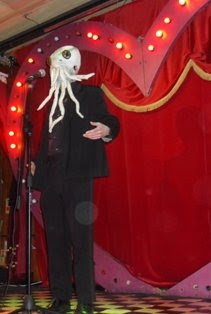 I was particularly taken by the evening's crooner, Mr H P Lovebox, joining us from the tentacled slimy deeps to sing amongst other tunes, 'I want to do bad things to you' and 'Dance with me' although I am quite sure the latter deviated in lyrics considerably from the original. Great fun for lovers of the old creepy Misogynist demon fiddler himself. Another unique act involved a birdman lip synching in a curiously engaging way. The only time a cabaret act has resulted in having to fish pine nuts from my..ahem..decolletage. Othe acts included a singer, a couple of burlesque performers and a fire eater. 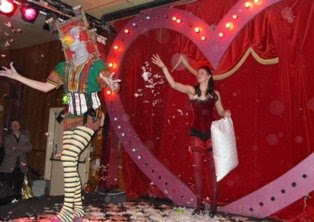 A birdman warbles....
There are a number of arch cabaret evenings in London at the moment. This one is notable for it's unexpected combination of conviviality and gothicism. Rose wanders around dispensing her (delicious) home made mini-doughnuts, Emerald Fontaine mans a booth dispensing coffee cherry cocktails and glittery biscuits to attendees. During the interval those who found a knitted doughnut (Rose can knit literally anything) under their seat were inveigled into climbing the stage to take part in a doughnut- eating contest. The audience are a mix, some are there as Lynch fans (as decent scores in the Lynchian quiz revealed), some as cabaret fans and others just for the atmosphere. The tables were booked largely by regulars even though this club has only taken place for a few months. The next one is the night after this missive, but they happen monthly. Should a night of dark mayhem, camp giggles and sweet things appeal it is a highly recommended way to spend an evening.