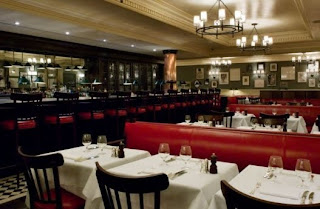 Apologies for not writing for a while, various shenanigans have taken up most of my time, most notably my magnum opus aka dissertation had to be polished up, dusted up and handed in. That is once it had received a semi-colonic irrigation from my charming editor. Having been a semi- student for a long time I was suddenly confronted with time, and proceeded to fill it, predictably, with booze.
On the day I handed my literary endeavour in I arranged to meet my friend Karen in her natural environment; Soho. We decided to head for the newest jewel in the Soho House crown, The Dean Street Townhouse, and more specifically it's dining room. I have always been a fan of Soho Houses' fine fries and charming staff but have an aversion to it's brand of interior. I believe that the disaster that is the new interior of Kettners is either a result of inteference from Soho Houses' house designer or influenced by her.
Deciding to first have a quick shufty at the hotel's lobby I was impressed, it looks like part of a Georgian building (which of course it kind of is) and is thus, pleasantly more Samuel Pepys than Jonathan Ross. The Dining Room is also atypical, the overall feel, with red leather banquettes and printed wallpaper is French, but comfortably middle class and respectable rather than Parisian and flighty. The food looked good, even at 3pm it was busy and more vitally, stretching along one side of the dining room was a nice, long, bar. Which was where we deposited ourselves.
The Dean Street Townhouse has been plastered all over the papers, even my mother, who lacks interest in such things, had heard of it. The concern is that it might be packed with those wealthy trolly types who roll into Soho from gawd knows where, which is not a problem, but they are rude, in an unimpressively rude way. Just boorish, unlike the hilariously rude who redeem themselves by shouting 'c***s' at the boorish rude. There is definitely a pecking order of rudeness, with the denizens of the late lamented Colony Rooms at the apex and some of the dodgy types in other Soho clubs at the bottom. When we were there the Dean Street place seemed to be quite free of this, in fact it was quite amiable and jolly. My friend immediately ran into friends which was a good sign. The only celeb was professional Liverpudlian Alexei Sayle who has always seemed an amiable type and the staff were also amiable.. and good. After a couple of Proseccos we were both also very amiable.
I also got the impression that drinking was allowed (sometimes this does not feel as it is the case in Soho's trendier corners), the barman did not mind being winked at, and our shameless claims of being poverty struck, and in my case, a Librarian, did prompt complimentary nuts. We caught up with the lads at various points, were rather well oiled by the time we made it to the French, and quite happy. I don't know what the place is like in the evening or at weekends, for a drink on a weekday afternoon however the Dean Street Townhouse Hotel Dining Rooms were completely sufficient and in fact, very pleasant. I hope to try the resolutely British menu some time soon.
Dean Street Town House Hotel and Dining Room Homepage here:
http://www.deanstreettownhouse.com/
Posted by RedlegsinSoho at 09:53