The internet is now awash with pictures of the Chap Olympiad and certainly the attendees were awash, bejesus it rained.  I expect the majority of people reading this know of this event but if not, my beloved came up with the idea in the pub, when drinking, which contrary to his assertions is not generally his finest hour. Seven years on it is still going. I’ve had a real moan about the mass media hype/hijack of the word ‘vintage’, but if there ever was a scene appended to this curious word, and it was a good thing…its chief jamboree would resemble something like the Chap Olympiad, held last Sunday in Bedford Square.
This year could become known as the year of the Great Chap Flood, I went fully equipped, in a small straw hat, a pastel blue dress and cream shoes. With the exception of snow I tend to ignore London weather being a strong believer in the efficacy of ‘gin-proofing’ to make oneself impervious to all the elements. My imperviousness extended to refusals to be spanked by Atters (really!) or to compete much. My stab at shouting at the foreigner rapidly descended into hug the foreigner on the basis that said foreigner was too appealing to be shouted at. I’m useless, or a tart, I embraced Bell the Butler too.
There are several things to treasure about the Olympiad, it is full of genuinely friendly people. It is not elitist but the usual rent a mob with false taches and polyester flapper frocks are largely absent. It is not a place for donning costume but for pulling your absolutely favourite rags out of the closet and wearing them, no matter what they be. People compete in events for..gasp..fun.  Attendees come from all over the place, one Californian chap proposed to his girlfriend in the middle of the swooning tournament. Deckchairs were trashed, butlers baited, ironing boards surfed on and men forced into sundresses to compete. An array of stylish and downright funky dancemoves were displayed and massive amounts of booze and cucumber sandwiches were despatched with barely a cross word during the whole event.
The only very minor irritations were the media, who did at least produce nice film shows after the event, the inclement weather and the drink confiscating chaps who were a tad zealous. The wonderful Chap Magazine produce a wonderful day out…roll on 2012 and the only Olympiad worth two figs (and bit of grated nutmeg).
Meanwhile I’ll leave you with some photographs of the event , gleaned (stolen) from Tony Lee, Fleure De Guerre, Laura D'Alessio, Karen Hendry, Mathew Howard and Manthe Penton Harrap (who will let me know if they are peeved I’m sure) because I left my camera in a case and got rapidly too caught up to use it! They express the feel of the day more than my verbal dribblings can.
Were you there? Has your tweed finally dried out? Billet doux and memorandums always welcomed. xxx 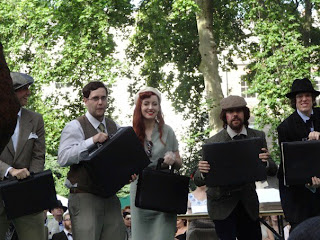 Probably you alreday spotted yourself amongst the lovely pictures by Stephanie Wolff at the fantastic London-In-Sight-Blog? If not:
http://londoninsight.wordpress.com/2011/07/20/the-chap-olympiad-2011/

I have indeed dried out - just. The Beard poor shoes are watermarked - but apart from that - all is well. Top day out!

If it's not really cheeky, can I ask if your dress is from Top Runway? Only I've been looking at one they do with a very similar cut, and yours looks splendid. (It's always great to see such things in 'real' photos.)

It does seem as though everyone had a fab time, despite the rain.

Dear Mim,
Yes it is TopRunway, I have a few dresses by her and am planning to get another one of these in a darker colour. x

Thanks! I've been thinking of getting a full-skirted one in grey for work.

Mmmm. I can just smell all the wet wool- nice!!! looks like a tip top time- apart from the wet, but then again us Brits do like a nice moan or what have you about the weather!
Tickety x