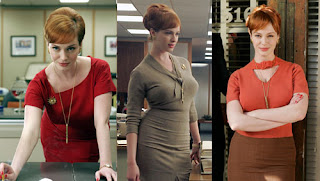 A bit of a hoo hah recently, once again about that vitally important subject, women's vital statistics. You wouldn't think we were at war or that there was a recession on or that we are being governed by idiots; which brings me neatly to the origin of the fuss, Equalities Minister Lynne Featherstone, who held up Hendrick's outline as an ideal shape for women. "Christina Hendricks is absolutely fabulous," she stated holding up the Mad Men actresses size 14 figure as one young women should 'aspire' to.

Quite rightly there has been a backlash from those who say there is nothing wrong with being very slender and from others that point out that women should not slavishly mold their size on anyone. Both reasonable points. But what has annoyed me personally have been some of the other suggestions and inferences.

One is that Ms Hendricks size is unattainable and that size 14, being by implication a 'fat' size, means you don't have a waist. Just a big stomach. It is quite true that on Mad Men the actress is squeezed into corsetry. This has been pointed out with some glee by certain commentators. This leads me to my first point. Surely changing your shape with foundation garments is more healthy, reasonable and convenient than starving or liposuction? And aren't those corsets, well sexy?

The other issue is shape. Obviously if you were naturally a petite slim 10 and you fattened yourself up you could not guarantee where the weight will go and you could end up barrel shaped. However if you are naturally in the 12-14 size range it seems likely that you will be curvaceous in the hourglass sense. Being a 14 does not automatically equate to being round. It is a natural size to be. My natural size is, and has always been either a size 12 or 14. I didn't swell up to get there, I grew up into this size from being a child to a teenager. And in any case only in a hopelessly screwed up culture would she be described as anything but quite trim.

What is difficult to emulate is Ms Hendricks creamy complexion, beautiful features and marvelous hair. However my opinion is that by being a different body shape to that generally promoted by body fascists her presence is welcome even though personally I would rather young women aspired to education and success. In any case I'll let the lady herself have the last word: 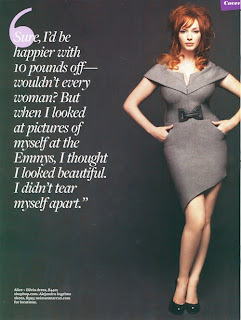 Minn x
Posted by RedlegsinSoho at 04:40

She's stunning! I'm a size 6 and if I knew I could look like that at size 14 I would go for it! Unfortunately, when I get up to that size range I just look like a barrel. And that thing about how you gain weight in your boobs? Well, it doesn't happen for all of us. My derrier, however...

Easy question for me to answer - yes! I'm a similar size and shape (or would be if I could face corsets on a daily basis).
I've only just got round to watching madmen and have a huge girl-crush on Joan!
I think what you've said is absolutely right - everyone has a different 'personal best'. I'm just happy that Christina Hendricks is a shape I can realistically aspire to, tending as I do to a natural hourglass!

I sadly no longer look like this however yes it is possible to have that figure without foundation garments you're right, it depends on your shape. I was always an hourglass - sadly round at the moment but hey ho - but I had a large bust, a very defined waist and hips although I always had a small tummy too.

But really I think people need to make the best of themselves some people look fabulous at a 14, 16 or 18, some look awful, I personally have never been less that a 12 apart from once and boy was I scrawny looking!

As a chap I have to say I would rather have a girl who was comfortable in her natural size and dressed to suit it than strove after some impossible ideal, whether that ideal is size 14 or size 6. Or whatever the case may be, I really have no idea which sizes are what.

Your blog is wonderful retro-vintage-chappette...do you have an email address connected to this? I can't find one, but would really like to fill you in on an eccentric Victorian Sculpture walk of Hyde Park that may be of interest to you - there'll be Dandy's ahoy and a roaming penny-farthing hopefully. If that tickles your fancy do get in touch with me at becky@loveartlondon. We'd be happy to give you a press pass.

Thank you for the comments all.
Rebecca, the email for this blog is:
redlegsinsoho@me.com

I absolutely adore Joan. I was reading a similar article on Yahoo that suggested she was a C or D cup? Whoever wrote that was clearly a clueless male - the lady has far bigger girls than that! I'm currently on the search for a pen/necklace a la Joanie at the moment, and if anyone could help me out I'd be forever greatful!

Oh Minna. I'll turn this debate on his head and say, just when the feck are media/people going to focus on intelligence and ability (her acting prowess) rather than size? I'm just so over the size is a feminist issue debate. Women are their own worst enemies in this subject as they play along with it and focus on the 'size matters' issues. It doesn't. I'd advise anyone to decipher wood from trees and when one is being PR spun a media story.

Quite right Katie but the
post was more prompted as the debate was sparked by a government minister-and then caused a lot of criticism of my own personal dress size (14) as 'fat' or 'outsize' or 'barrel shaped' than Christina Hendricks herself.
I have never regarded myself as being thought of as 'fat' until this, just 'not thin'. Only yesterday a letter appeared in the press stating that accepting size 14 or 16 as a norm was a sign of how bad our society had become.
It was just that I am not prepared to become a media bogey woman for not being skinny even though I am in the official NHS 'healthy' weight range for my height. x

I love Christina Hendricks! I also love women like Kim Kardashian (gasp!) who are no longer apologizing for their curves, but embracing them and telling everyone else to back off!

I would.
Christ, I even bought this month's stultifyingly banal GQ because of her.

(I thought I'd just add a bit of honest-but-shallow, male, eyes-on-stalks, lady appreciation to the comments).

WDI, Lady appreciation from the right sort of chap is always welcome. x

Love this article ... I think it's so important for women in positions of influence to be proud of their appearance whatever their shape but the most important thing is to be healthy - and confident with yourself inside and out

I have often been amazed when men tell me that they prefer a "womanly" body to what most would perceive the perfect elfin figure. They much prefer the curves to slim. As a size 12-14 I am very gratified to hear it! So well done us!

Its like you read my thoughts! You seem to know
so much about this, like you wrote the e book in it
or something. I feel that you can do with some percent to pressure the message house a little
bit, but instead of that, that is magnificent blog.
A great read. I'll definitely be back.


Have a look at my web page; joc tretis

Heya i am for the first time here. I found this board and I find It truly useful & it helped me
out much. I hope to give something back and help others like you helped me.

Thanks for any other fantastic post. The place else could anybody
get that kind of info in such a perfect approach of writing?
I've a presentation next week, and I am at the search for such information.

It's so sad, SHE'S A GREAT ACTRESS. We are not moving forward at all when the only thing we can ever talk about when it comes to accomplished women is how they look. Can't we think of anything else to talk about when it comes to women. It must drive her crazy that no matter what she does professionally, people only even congratulate her/deride her based on her looks.

But many years later applications started to buildup and one of
these was the gaming software. You would locate a wide-range of games on Facebook.
Getting more lives and retain them returning!