London has a vibrant restaurant team, yet this vibrancy seldom seems to extend to the feel of the places where we dine. The default is bleached wood, bleached walls and tastefully bleached abstracts on the walls. When this is not the case there is, even with the most dramatic interiors a restraint, a tendency to take the historic route. I feel this is a result of the parsimony of the chattering classes tempered by the fear that a flamboyant interior will detract from the food, or in the cliche often employed by food writers, the food will not be 'able to speak for itself'. Personally I feel an important element of dining out is occasion; that you are not eating in any space that apes your home or that of your friends. Which is why I am becoming steadily more irritated by the tendency of restaurants to ape a Notting Hill/Islington genus of domestic aesthetics. Restaurants are public places, and a chef with confidence can cope with the most demented interior. Anything is preferable to bland. 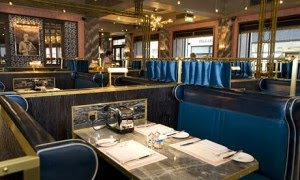 Interior of Bob Bob Ricard.
Bland is especially undesirable when you are dolled up to the nines, what you want is an environment worth the pin-curls and pain. Bob Bob Ricard in Soho where I ate last week is one of those establishments that has the courage of its convictions and is most distinctly not 'griege' in any way. You could certainly take your smartest thirties suit and smartest chap out to it. The interior is glamorous but not conventional. The place has, on one side a pleasingly thirties feel, with deco designs on the windows and surfaces burnished in shades of varnished browns. The kind of place a Shanghai Express Dietrich could slink into with its hints of classy Pullman dining car velvetiness. The seating booths, in dark blue/green leather upholstered leather also has the intimacy that was a trademark of restaurants and supper clubs of that era. It also makes it a decent location for assignations or dates. At the same time the use of gold and the seventies brutalist/cubist style chandeliers give the place more than a hint of high class Moscow Hotel bar and I was unsurprised to detect a Russian influence in the menu. Even more so as the titular Bob Bob is Russian. 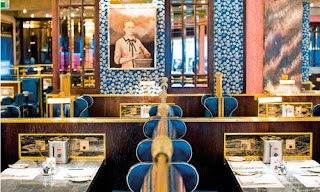 Bob Bob Ricard offers ‘all day’ dining which has produced an eclectic menu containing as it has to, food suitable for brunch, lunch, afternoon and late night meals. We were moving on to a private view and knew we would be drinking possibly until late so we ate early in the evening ,and for us, lightly. Amongst the dishes we sampled the stand outs included Torquil's starter of a venison steak tartare. Less oleaginous than the traditional beef steak version it was well seasoned and had a pleasing gamey edge. I also liked the presentation, the raw quail egg to top the tartare sat in it's shell and the interior of a quails egg posesses of the most beautiful colours on God's earth. We opted for Russian dishes as our main courses. A chicken Kiev was efficiently prepared and filling. I had pelmeni, small dumplings that disconcertingly always resemble either contraceptive caps or door handles. But they are meaty tasty little things and I like all things dumpling. Talking of little things I had the little lemon pot dessert which turned out to be an engaging combination of tart lemon dessert, with fresh raspberries and a long pastry straw which was very handy for accessing the lemon goo (encased in one of those funny little kilner jars that restaurateurs love so much. There have been criticisms that the restaurant is too eclectic, but we managed formal traditional three course meals with no problems. Recently people have become obsessed with being led and guided through their food, but if you want several small dishes, I see no reason why a restaurant should be criticised for a tapas like approach. 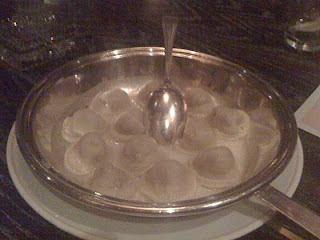 Pelmeni.
Personally I felt whilst there that Bob Bob Ricard had a few things to offer that are currently under the radar of London diners, possibly due to its location in one of the more obscure side roads in the Carnaby Street end of Soho. 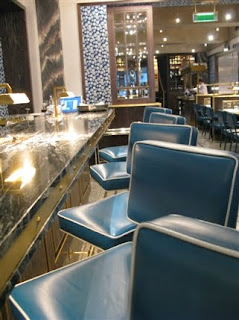 Ground floor bar.
One was its attractive bar. There are no grand hotel bars in this immediate area to go to for a good cocktail in sophisticated surroundings. Most drinking holes in the area are either full of braying media types in the week or stag/hen nights at the weekend. Prices for cocktails were reasonable and we felt this would be a very good place to kick off your Soho night with a few martinis. I heard the comforting rattle of a shaker several times and the cocktails did look good. The basement bar/restaurant area is currently being renovated but should open in September. Even in disarray it had a more louche speakeasy feel than the ground floor. In addition, and I feel the need to capitalise this, the floor is designed and inlaid to resemble a BACKGAMMON BOARD. It may well be a contender for best floor in a London restaurant land, an honour currently held by the Wolseley (no great shocker as the same designer is behind both establishments and the man’s a genius). 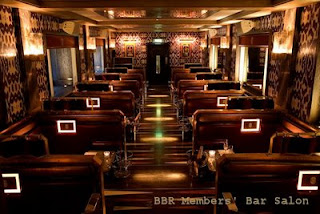 The downstairs area (re-opening in September) please note floor.
The other thing I could not help but notice was CAKE or rather a small group of young women having a late and somewhat boozy afternoon tea. The afternoon tea looked charming, I was really taken with the witty cakes on the upper tier which were miniatures of traditional classics; a tiny square of battenburg, a miniature slice of victoria sponge and what must be a contender for the smallest rhum baba in the world.

So what did I think of the place? Well I review primarily from the point of view of the vintage-retro interested Soho diner. And from this point of view sheerly in response to its full-on glamour it gets a thumbs up, I do feel that it is the perfect place to lounge around and chomp our way through caviar, eggs benedict and english cheeses. We plan to go back and carry out the patented 'White Lady' cocktail test at the bar and will report back but the overall impression was of a bartender who knew what he was doing. Whilst saying that it is not a cheap restaurant it does have occasional tastings and special offers and this one caught my eye:

‘Let Them Eat Caviar’ at Bob Bob Ricard
In line with Bob’s commitment to make Bob Bob Ricard the number one choice for caviar in London, he presents The Caviar Lunch at just £19.75 every day throughout the month of August. Lunch consists of 10gr Caviar With Sour Cream And Blinis; Meat Pelmeni or Truffle & Potato Vareniki and a shot of Russian Standard Vodka served at minus 18C and must be ordered before 5pm.
Bob Bob Ricard already has a reputation for the best -priced fine wine and champagne list in the UK and is committed to extending unprecedented value to all of the luxury items on its menu. For comparison, the 10gr tin of caviar alone would cost £24 to buy retail at Harrods or Fortnum & Mason.
Ultimately I liked the place, the bar, the afternoon tea and the propensity to graze on smaller dishes are things I appreciate. I have my quibbles, one is that they are not getting the glamorous female clientele they could for afternoon teas and cocktails. The music didn’t appeal (but then again it seldom does). The service was good if a bit nervous, the one mistake with the order was rectified immediately. It will be interesting to see how it develops and what effect the re-opening of the basement floor will have. I’ll certainly be popping in with some ladies to try that afternoon tea…
A fuller more comprehensive review can be found at The Retrometropolitan blog, please have a look. Feedback is always welcome.
Posted by RedlegsinSoho at 09:10

Indeed, at least I drink (what is the point of a restaurant critic who cannot drink?) and am not obsessed with comparing food to body parts..

The bar downstairs sounds like an excellent place, so will definitely visit.

In London this Autumn so will save an evening to try this, sounds great!
Retrojenny.

I went when it opened as I work round the corner, loved it inside but was disorganised, but I think we will go back and try champange and afternoon tea.

Always around christmas i go afternoon/high tea crazy. I'm very happy that around this time of year there are a lot of afternoon tea special offers for places like Red Legs and the likes.