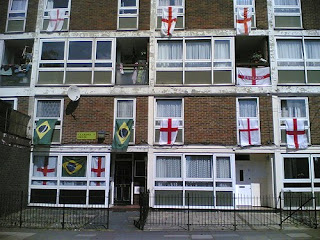 There has in , due to a certain sporting tournament, been an outbreak of flags. I mean of course the Cross. The response has been interesting. I have a negligible interest in football (in fact I anticipate the end of the whole thing keenly) but find the sprouting of red crosses and indeed the other flags of combatant nations festive and agreeable. Grim squat blocks of flats are enlivened by flapping swathes of fabric, perky little flags adorn a range of vehicles and bunting hangs from a range of restaurant and shop fronts.

Such a positive reaction has been far from universal. There has been a snide Facebook posting implying that flying the English flag should signify the presence of a man with small privates. How delightful, patriotism and an interest in sport associated with penile inferiority. Would those ironists apply the same philosophy to the flags of , the or which I am sure are just as prominent in their home nations? I suspect not as it is natural not to want to be thought patronising or elitist. 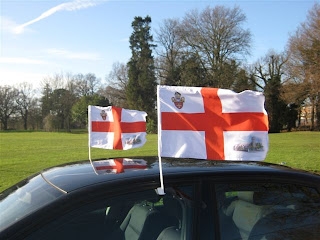 However perhaps there is an element of ‘it’s our flag so we can moan about it’. Certainly there have been associations between the StGC and far-right politics and football thuggery. National flags are shanghaied by extremists in most countries. Funnily enough having lived through the emergence of groups such as the NF during the eighties I never have. Perhaps because that group are a small minority and I recall the StGC far more for its appearance during the Queen’s parties. Notwithstanding this some people of my own age still seem to regard the StGC as a vulgar aggressive symbol.

In terms of aggression all national flags, especially that belonging to the primary driver of a nation which annexed a large part of the world are a tad militaristic. has a disgraceful Imperial History but the ‘fried egg’ is a full part of that country's visual way of thinking of themselves. Some might counter that the Union Jack is the national flag, but it isn’t. I am English and that flag features elements of the heraldry of conquered nations. Something that the liberal in me finds less comfortable than the St George’s cross. The truly reprehensible realise that national flags are hard to control, which is why the Nazis and similar regimes create new ones of their own. 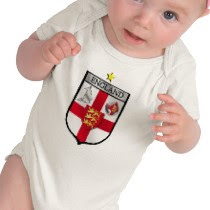 I think the idea that wearing the Cross is somehow common or vulgar is more revealing. There is snobbery afoot here. It is largely the working class or more fairly the ordinary Englishman donning his t-shirt, putting his baby in StGC babygrows or inexpertly painting his/her face. The chattering achingly middle class individual would rather wear a gimp mask than hang a StGC from their window. The StGC does conjure up qualities that are perhaps not sophisticated: pride, pugnaciousness, belligerence, earthiness, vulgarity, hilarity and chippiness. However these are sometimes the very qualities that makes an Englishman English and has powered this country's survival against heavy odds. I find sniping at football fan’s affection for the flag, especially when thousands of squaddies are being shot at in revolting hot countries is a real example of narrow-minded philistinism.

You don’t have to like football, you don’t have to like red and white (I’d quite like something in pink and silver but I digress) and you might simply not like flags per se but there is no reason to snipe. Perhaps you don’t like what it stands for ie and Englishness and the whole cornucopia of positive and negative elements which clash together to constitute it (which would beg the question of why emigration has not been considered). But the flags are jolly, they are cheerful, cheap and accessible. I have seen them in Turkish barbers, Chinese Take-aways, Indian restaurants and Vietnamese nail bars. When I see a baby wearing a t-shirt or a huge flag flapping in the wind outside a pub it cheers me up. And lets face it, this is a city that needs cheering up. 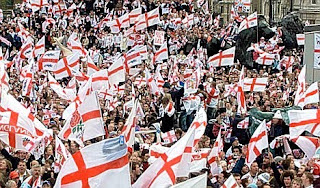