My waist is above my bum, not right under my bust...

Ever since returning to Blighty back in '05 it seems the high street has been awash with a cut that veers somewhere between 1960's baby doll ingenue and Jane Austen Empire line. Fashion is fickle but to be quite frank I am surprised this particular cut has maintained its popularity within younger brands and cheaper stores. Why? Well frankly, having a high waistline is profoundly unflattering to the vast majority of body shapes in this country. For some reason fashion pundits are always referring to the 'slimming' effects of empire line tops and frocks. This may be the case if it is subtle. Otherwise the result is simply that you look pregnant, fat, ungainly and your bust starts to resemble something like the prow of a tug, or something you could organise objet d'art upon. They makes us look like pregnant heiffers. This is a fact that has been observed again and again in the press. Three years ago, in March 2007, the Telegraph's Sarah Mower pointed out that:

".... the British are in the grips of their own special fashion delusion: the smock. Sometimes it takes people from other cultures - such as men and foreign visitors - to point out that there's something absurd going on.

The first warning came from my husband, who jovially exclaimed in the pub: "Oh look, have you seen? That girl from EMI's pregnant."

The second came from a Los Angeles Times journalist whom I sent to Topshop during London Fashion Week. The next time I sat next to her she said: "When did they turn it over to maternity wear?"

I hate the smock. Only babies should wear them; grown women, never. Last time they were in fashion - about 1970, I seem to remember - only teenagers (and pregnant women) wore them, and then with long skirts or flares. Teenagers in those days were flat-chested. Women now are not, and the ubiquitous wearing of under-wired double D-cup bras renders the 2007 smock look, well, pregnant, or at least sleazy in a What Ever Happened to Baby Jane? sort of way.'?" 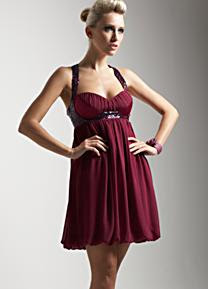 I concurr. The ultra gathered smockiness has been superceded by the complete dominance of the high waistline. This cannot be blamed on haute couture or designers. Their collections have contained a plethora of shapes and cuts. Who, also can forget the influence of designers such as Westwood or Mouret who champion waists and hips? Notably the high end high street retailers who cater for an older clientele have dresses with waists, sadly their prices exceed my current spending power. 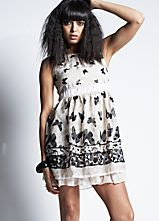 Distinct edge of child prostitute about this one, or maybe she's pregnant too...

The blame for this continuing slavishness to the shape can probably be laid at the feet of the current crop of teenage style leaders, the least stylish since those who inhabited the mid 70's. When, come to think of it, this shape denying cut was last dominant. Perhaps the super skinny feel that being by wearing clothing that is unforgiving to all but the borderline anorexic they are showing off their slimness? The problem is they can still be skinny and pregnant. Men now resist asking apparently pregnant women if they would like a seat on the tube, as the bearded one has complained it is impossible to tell if someone is up the duff. The genuinely bun in ovened who often have to adopt tents are being deprived of comfort by their sisters' poor fashion choices! 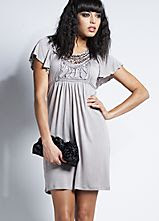 Fashion magazines of the cheaper kind also don't help as their stock response to the size 14 -18 lady in their make-overs are routinely dumped into some form of tailored smock over skinny trousers. This is partially due to the percieved unfashionableness of the wrap dress. The wrap dress is of course genuinely skimming and flattering; why has this become de trop and the fabric equivalent of a balloon suit remained popular? Is it something to do with the times? surely recession tends to breed interesting fashion, think of the stylish recessions of the past. Maybe this white collar recession has not bred rebellion and edge but a big national whinge of 'why me?' Perhaps this urge to look like fat, childish creatures is a call for help. Who knows, all I know is that it is boring the hell out of me. I suspect it is one of the factors, along the popularity of a hundred shades of griege, that has driven me towards retro and vintage influenced styling.

The baby doll look had some element of novelty in the 60's on a Bardot, but now it simply looks a bit skanky. Somehow our so called 'it' girls don't look like fresh ingenues like Julie Christie but just inelegant. It is about time someone called time on the whole thing and that the high street realised it's important, mid-level, 30s-50's customers are not being served. It is about time we told them all to 'SMOCK OFF'. 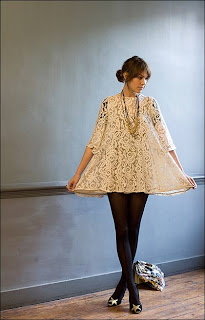 Fab Red legs :) - there's no style in fashion nowadays - I've had a few dreadful smock moments and always decide to take it off and wear something better before going out! I dont want to look like my niece!

Hmm. I'm 2 ways here, Minna... I let my Stevie Nicks persona loose every so often and love DVF, Temperley and Matthew Williamson (as you know) so I can't banish the 'smock' I'm afraid. I must say I hate baby dolls on anyone over a size 34D (ie me) so that one can go - definately.

Hmm. I'm 2 ways here, Minna... I let my Stevie Nicks persona loose every so often and love DVF, Temperley and Matthew Williamson (as you know) so I can't banish the 'smock' I'm afraid. I must say I hate baby dolls on anyone over a size 34D (ie me) so that one can go - definately.

I have never been one for empire lines, even when I had no bust! Still, if I do ever decide to have kids, it will save money, although knowing my luck they will have gone for good by then!

I'm with you, horrible unflattering things, I'm sick of seeing them, Smock off!

I have one of these dresses... I wore it when I was pregnant and have not worn it since.

I think they make for comfy nightwear but I am not a smock girl!

Smocks are entirely unflattering. I had a couple when I was 14-15 (in the 70s when they were fashionable before) and they made sense to the way my body was then. Now, clearly, they don't! I also hate the hipster look, which looks very nice on beanpole-type bodies, but not on anyone else. Why can't waists come back into fashion? Surely it is about time?

All this just adds to my love of vintage clothes...

hear hear! What a dreadful dress style. I think I wore one back in junior high and it was flattering, but one hopes that one's style choices have grown and changed after 15 years (esp if one's bust has).