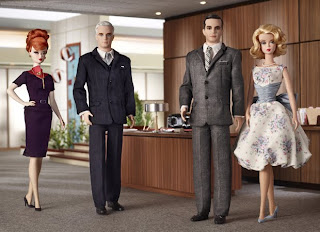 Mad Men Barbie Dolls.
Barbie are launching a collector's edition of it's dolls based on the superb US television series 'Mad Men'. There is a picture above. As ever the Male dolls don't quit cut the mustard. The Don Draper one looks more like a character from 'Twilight'. I am, however, fascinated by their effort to produce a middle-aged man doll . Personally I think it is probably well nigh impossible to capture the caddish silver fox that is Roger Sterling in all his droll dry glory. His doll looks most peculiar, like a cadaverous Steve Martin. Faces aside the suits don't work, perhaps because men's tailoring, especially of this era, requires movement. And these man dolls are unlikely to be arranged in louche lounging positions due to the limitations of Barbie limb articulation. More to the point, the required accoutrements: a cigarette or a tumbler of whisky are rendered impossible by the prudishness of the manufacturer's home nation.


The ladies are more appealing. Betty Draper, the most tedious female character on the show is virtually a Barbie anyway, albeit a frustrated and trapped suburban one. The frou frou fifties prom style dress and the Grace Kelly swirl of ice cream hair look completely appropriate. The character is a doll. The Joan Holloway doll is a little disappointing, it seems Barbie did not have the guts to represent the voluptous gorgeousness of the sharp sassy secretary. The hair and dress design are, however, charming. I'd have liked a Peggy, but expect a comparatively plain yet intelligent character might be a step too far... The dolls have a special ceramic style finish which is interesting and they do at least seem to have the right skin, not the colour of old prawns favoured by the modern Barbies. Despite the carping I do sort of covet the Joan doll, but only sort of. Actually I would rather have Pan Am Barbie, or raunchy rockabilly Barbie if I were not too old for dollies. 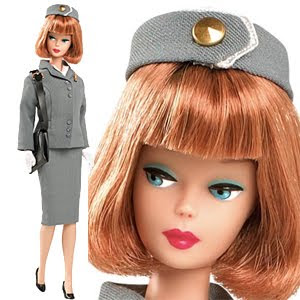 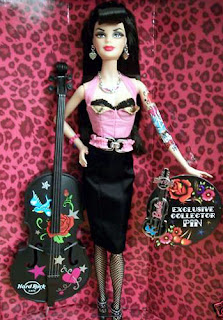 This post was not intended to be about disappointment but I feel let down that the Mad Men style seems to have had more effect on menswear. My friend Laurence was wearing a wonderful suit last weekend which echoed that rat pack styling. The beautiful curve hugging dresses, wonderful rich colours and elegant shoes worn by the female cast do not seem to have had much of an effect, but when they do it is ruined by odd tailoring. This dress (pictured below) from Phase Eight looked promising but was far too short and the waist was, quite unlike the photograph, high. I am hoping that fashion is being slow and that Autumn/Winter '10 on the High Street will see a feast of lovely clingy tailored frocks; but I am not holding my breath.

Just wait till next season...Paris and Milan went mad for it (geddit?) and the high street's bound to replicate.

That Roger Sterling doll does indeed look like "a cadaverous Steve Martin". How funny! I'd love to wear some of the dresses Joan wears, but sadly have never seen any to buy.

Bettie Page Clothing have done a couple of Mad Men dresses - the "Charm" dress in particular is very Joan!

I love that photo of the dolls. Someone else I know blogged this and it reminded everyone of how they'd have their Barbies and Kens and their brother's GI Joe have sex. Now imagine that with those characters from Mad Men. Kind of like a vintage version of that scene from Team America....

PS: Monarch do Sindys! I got one for myself and a friend of mine was so envious I had to pick one up for her when I next flew. ;) And when I was little I had a Dan Air doll dressed by YSL. Oh yes.

I feel your pain with the high waists.

I think there was a lot more of this kind of tailoring on this seasons catwalks, maybe by winter there will be more on the High Street. This season is all still frilly chiffons.