Fleur kindly arranged cheapo tickets for us to get over to Bethnal Green for the farewell party of the Whoopee Club on 11th Dec, an organisation that has been going in it's current form for yonks.  The bearded one and I have several friends whom, over the years have performed at their events which were always thrown with gusto and a ambition. You might find yourself strolling around a totally transformed Great Eastern Hotel or watching synchronised swimming in a period baths (how very bright young people).  The Whoopee Club pride themselves on having been in at the start of the Burlesque Revival but I always felt they were more than tassels, far too innovative and far too wide a range of Cabaret to be pigeonholed in that way.
It was an enjoyable night, I like the working man clubness of the place (its in East London home of the arty fart so that is a relief) and the Japanese themed booth selling sushi and okashi took me back, although I decided not to inflict my Gunma accent on the lady manning it.  The crowd were a good mix, particularly of ages. My old bagness means that I resent being somewhere full of 19 year olds. An unpretentious yet stylish group of people who were more interested in just yapping, watching and drinking than any thing else, which is as it should be. 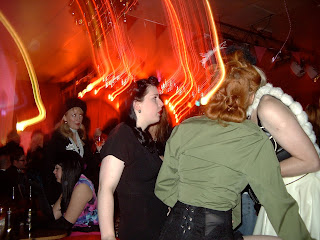 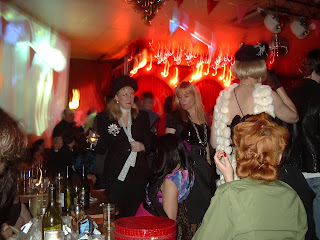 I wonder why they have thrown in the towel? May just be fatigue, perhaps it is the scene, which seems to have begun to be co-opted by big business and the kind of people it was designed to avoid.  Todays Evening Standard had an article about new supper and cabaret clubs.  As if anything about it is new...I didn't like the sound of the people setting them up, nor their clientele which was a bit too Bungalow 8.  A market for cabaret performers is a good thing, but not if it is going to be tacked onto a dinner (main courses from £25.00 a pop!). Mind you the fine thing is that the kind of dross in the ES magazine get to everything last... 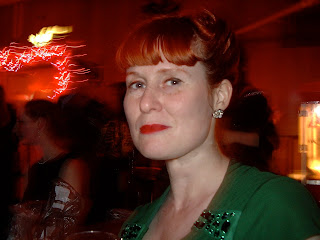 Perhaps another element is the pervasiveness of burlesque in the tassel/cheesecake/dita tradition which has become fairly dull.  The performers I like have a bit of mischief, do a little magic, make you laugh or entertain. As a girly I have seen boobs before. The burlesque at Whoopee included Fancy Chance who I like because there is something subversive about her approach, she blindfolds the spiv who teases her with his nylons and drives him insane.  Audacity Chutzpah ( a name I have never encountered at a bar mitzvah) gave a burlesque history of women, including women's suffrage, the war and the 80's yuppie, the funny historical little run-up justified the reveal, although personally I could have done without it.  Other performers we caught included Bishi (SP?) singing an elegant refined version of Strawberry Fayre and Paloma Faith singing with the help of the charming Joshua.  There was lots on later but alas we left, Cinderella like, at 1am due to the need to grapple with a dissertation the following morn.  But Whoopee Club, we mourn your passing. 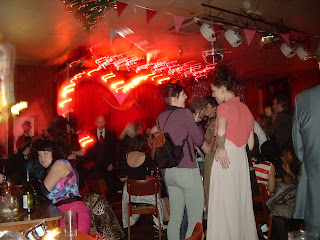 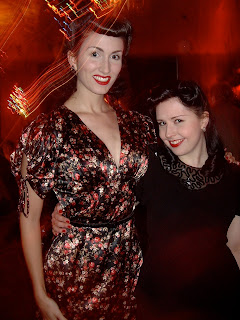 The Whoopee Club came to an end due to bad financial mismanagement.
I worked on one of their final shows which was funded by the arts council and another funding organisation. It was quite a sizeable grant - more than enough to put on a good show.
Most of the team who worked on the show did not get paid for the work they did. The producer was 'economical with the truth' in her dealings with people - she did not let on that unless the show was a success, people wouldn't get paid or that the finances of the club were in such a poor state.However, there seems to have been enough money that the club could afford to throw a farewell party...
BECTU the trade union now recommends that their members contact the union before accepting work from The Whoopee Club or the producers due to their total lack of professionalism.
Hope this sheds a bit of light on your query as to why the club came to an end.

Dear Anonymous, I am a freelance journalist researching a feature on the UK burlesque scene and was wondering why The Whoopee club closed. Please email me: lucy_sambrook@hotmail.co.uk, if you could tell me what happened (anonymously of course)x