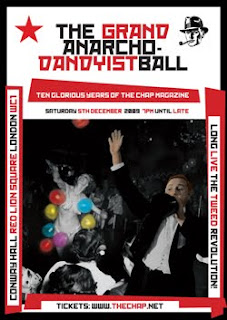 As some know the bearded one is very involved with that remarkable publication 'The Chap Magazine' which celebrated it's tenth anniversary with a ball at Holborn's Conway Hall on Saturday the 5th of December. In view of this fact and the rarity of Chap parties (the last being five years previously) it was highly anticipated. Red legs put on her favourite 30's evening hat, a long frock and some slap and headed off into a rainy night....
The venue is an interesting spot, a gathering place for humanist and ethical groups it was an intriguing combination of fine wooden panelled town hall circa 1930, school gymnasium from Daisy Pulls it Off and Scout hut. I was particularly taken with the jellyfish panel on one corridor wall featuring sea life made out of mysterious plastic substances. Upon entering the hall one was greeted by a charming trio of chaps singing cheerily and playing the saw. Also by the entrance was a stall selling little cakes and sausage rolls, untouched early in the evening a few hours and several gins later guests fell upon them. In addition there was the Mao Tse Tung lounge run by the stellar Louise, a Hendricks gin bar and the main hall.
The atmosphere was interesting, the guests were an amalgam of various distinct groups, nearly all were dressed up to the nines, those that were not stood out. What a pleasant change from the pervading norm! As Twin and Tonic and Mr B performed I had a fine view from the balcony. It revealed gothy ladies in peacock feathers twirling to Glenn Miller tunes, chaps in tweed plus fours waving their pipes in the air and throwing shapes and the skillful and not so skillful dancing, completely democratically to whatever music played. The floor was littered with paper aeroplanes from an act I had missed but which were intermittently retrieved and hurled through the air to land in surprised chapettes' gin and tonics. The acts I saw were good, but I missed many. More fun was to be had catching up with people not seen for an age. It was a pleasure to see the military uniforms from various eras, the steam punk contingent combining tweed with mechanical swagger, Vivienne of Holloway giggling with a small coterie of perfectly dressed fifties rockabilly poppets, the 40's types lindy hopping far too proficiently, the pale skinned flappers and lots of ladies with pin curled hair and gents with real facial hair. Shame however on the few fake tache wearers, grow them gentleman please! An honourable exception was one chap with a preposterous big black Dennis the Menace merkin-like facial attachment which, of course, worked perfectly. 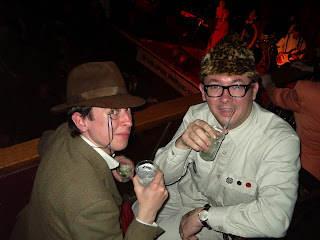 Mr Gustav Temple looked splendid in his topper, Mr Sebastian Horsley stood out in his remarkable chimney of a stove piper and Mr David Piper provided an elegant, laconic contrast to the chap hoppers in the front row. Mr Micheal Attree's paranormal chaporgasmic presentation was educational but I am concerned that he may be in trouble with the Save the Mermaid rabble. Louise looked marvellously oriental in her kimono and Mr Torquil Arbuthnot was elusive, red legs spent a great deal of the night searching for him.... In short there was enough chaos and sillliness to remind those there that the Chap has never been the resort of the young fogey who wants to be an aristocrat or of the disenchanted hooray...but for the intelligent flaneur who walks through life with paradoxical disdain for modern vulgarity coupled with a great enthusiasm for, modern vulgarity. 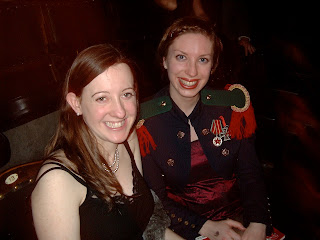 Of course there were set backs, perfection is always elusive. The chaps and chapettes characteristically drank one of the bars dry of gin, the queues for bar and dressing room were overlong but the greatest problem was a) that it finished too early and b) we might have to wait another five years for the next one. Mr Temple listen up your people need you! 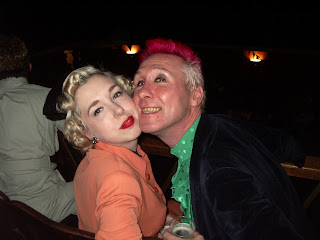 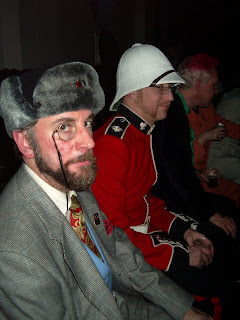 Good write up Ms Legs, and very apt description of who the Chap is for. There does seem to be a great divide between the young fogeys/conservatives/wannabe upper classes and the actual anarcho-dandyists. But then there is a similar divide between vintage wearers - those who arrived at it by being dull and old-fashioned all their lives, and those who were always a bit 'different' and arrived at it while seeking an elegant, grown-up way to be 'different'.

I am cursing myself for not bringing my camera as Trum has said no one may have the official photos and his taking them was the only reason I didn't bring it! No review from me!

"As some know 'the Bearded one' is very involved in that remarkable publication The Chap Magazine"... ...God's Holy Trousers 'pon reading that opener I imagined someone t' be stalking/blogging 'bout m'self, for I am the bearded one!
;-D========

Hi to all, the contents present at this web page are in fact remarkable for people experience,
well, keep up the nice work fellows.

Here is my web page - get redirected here