It has been a while since I posted here, Summer raced by and what a nasty wet one it was. Now it is shocking to see the mince pies on the supermarket shelves and a pleasure to see the leaves change colour; Autumn is my favourite season. 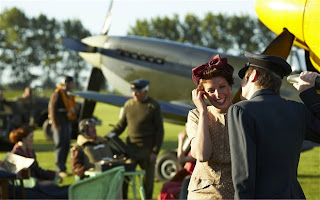 The stand out event of the last month was for me the Goodwood Revival. I haven’t been before, I am not a ‘petrol head’ and have always been more drawn to the horseracing. This year however things came together, I was able to join the Chap Magazine Olympiad crowd who had been invited to display their sporting prowess at the event.  Additionally a kind friend was prepared to put me up in Lewes which is one of my favourite English towns. I knew it would be a good weekend when I arrived and a cosy drink in the Lewes Arms was followed by a delicious meal prepared by my friend’s parents.

I knew that the Goodwood Revival was the ‘vintage’ inclined event and that Goodwood had dabbled with the scene by holding with Wayne Hemingway a Goodwood Vintage event a couple of years ago which had spawned various controversies. At the same time I was aware this was a serious three day weekend of motor racing, motorbike racing and aeroplane fly bys and displays.  I was not sure how I would find this, I don’t even drive. In fact I did actually have to stop one friend mid eulogy about some automobile engine and say ‘I am very sorry but I don’t have the faintest idea what you are talking about’. Basically for me a car is pretty, glamorous or suits my outfit. I care rather more about the person driving it and whether I can have a ride in it than any technical specifications. But I do have to say there were a great many very very pretty cars. There is also pleasure to be derived from being around enthusiasts having a great time in nearly all environments ( although some things, like dogging, or EDL demos are best avoided).

Retro wise there was something for everyone.  There were various high points. I loved the jolly faux fight between mods and rockers outside the retro Tescos, just typing that makes me smile. The Dad’s Army re-enactors were fun, and whilst in forties civvy street clothing on the Sunday I found myself flanked by Lance Corporal Jones trying to give me some sausages and Private Joe Walker trying to sell me black market nylons. Shortly after this we had a very civilised cup of tea with Harry and Edna in their CC21 display area.  Nearby there were also live camels, party of a Lawrence of Arabia themed exhibit.  The Chap Olympiad fitted extremely well into all this, providing an extra dose of surreal nonsense and particularly delighting families, after all what child is not entertained by men in hats battering each other with umbrellas? We were ‘on’three times a day, the audience were happy to participate and groups of people came back to watch it again.  There was a diverse range of entertainment available, including Mr B the Gentleman Rhymer in the Speckled Hen Tent and Black Elvis in the Butlins tent. There was also dancing, lots to drink and eat and of course, the racing.

This is an expensive event, but unlike some others I won’t be churlish enough to mention it was good value. The sheer number of vehicles, the racing, the vintage events, the shopping and the atmosphere were excellent. Lord March and his team seem to be pitching it very well to appeal to a wide range of visitors whilst, despite the crowds still maintaining an element of glamour.  I would love to obtain access to some of the ‘clubs’ and private pavilions but was very happy to meander around generally. The cold war theme adopted this year was applied with humour, I particularly liked the Sputnik satellite that had crashed by the entrance.  This event is great fun and I am looking forward to next year. I could even grow to like the smell of petrol and the roar of engines..

Hello m' dear, nice to have you back. Love the photo of you, it's super, looks as though it really was taken decades ago.
This is an event I'd love to go to and my other half would think he'd died and gone to heaven to see the planes, but it's just too far away.
Dammit!

This Heidi was also drawn to those lovely tights!

Hy this is Amy
UNIQUE Body to body massage & Girlfriend pretty lady knows how to make you happy so well and wants to please you & make you feel too good. Also, I play very safe, clean. I am waiting for you.Elegant, busty,super-sexy minx will visit to dissolute-sharing pleasant leisure! Want to plunge into the world of passion, affection and debauchery? Who are tired of the monotony and who wants to complete debauchery, call, do not hesitate! I am one of the best call girl in Frankfurt!!By VIP companion for Gentlemen who are looking for a special experience.

I want to share with you all here on how I got my loan from Mr Benjamin who helped me with a loan of 400,000.00 Euro to improve my business, It was easy and swift when i applied for the loan when things were getting rough with my business Mr Benjamin granted me loan without delay. Here is Mr Benjamin email/whatsapp contact: +1 989-394-3740, 247officedept@gmail.com.