Recently I have been a bit here, there and all over the place, thus my lack of blogginses. One of the there's I have been to was Barcelona, my brief to combine a bit of healthy R & R to recover from a rather unpleasant year, see a friend of mine and cast my eye over Barcelona in vintage terms. Of course Barcelona wasn't named for it's bars, that would be silly. But that is where I am going to start. With bars, the silly ones.

Some of my friends are very fond of faeries and I found the idea of a fairy inspired bar/cafe hard to resist. Especially when I found it was next to a waxwork museum. So my first touristic visit in the city of Gaudi and Miro in the bright sunshine was the waxwork museum. An odd but enjoyable experience, the waxworks were dreadful yet strangely the place was better for it. I was pretty much alone, you know that feeling when portraits follow you? well imagine the eyes of 20 waxwork figures following you around, deliciously spooky. I felt the need afterwards for a quick cervesa before heading out into the sun and popped into the El Bosc de les fades (Fades is fairy in the local lingo). 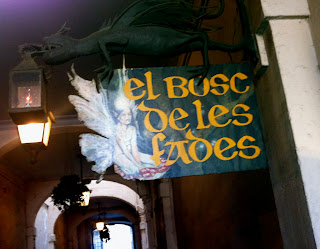 It was wonderfully loopy as the pictures below indicate, a fantastical dark grotto full of tiny lanterns, little pools and tree branches and leaves. Perfect for my faerie, Tolkein, Game of Throne loving friends and really very pretty. 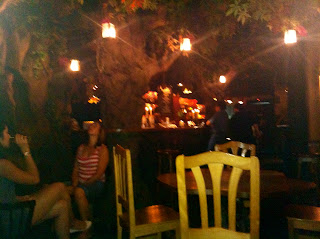 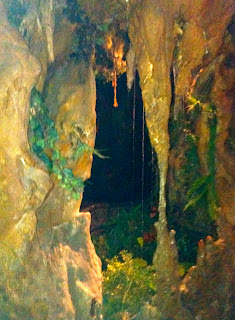 It wasn't all like a scene from a Dadd painting, another smaller part of the bar consisted of a rather more eery twisted fairy tale room (bad picture below). Drinking in here would have been strange, note the levitating figure in the corner. 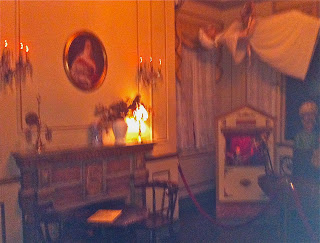 Another fantastical bar was 'Hook', pirate themed it was jammed full of fairy lights, galleons hanging from the ceiling, swords, parrots and obviously anything the owners found appealing.  What was particularly attractive was the presence of bric a brac that didn't ostensibly have anything to do with buccaneers. A 1950's radio, photographs of hollywood stars, and for some reason nutmeg on their pina coladas. Various photographs below. 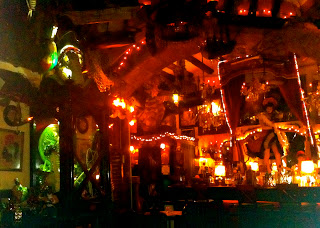 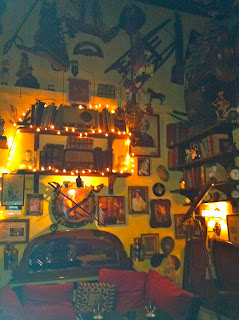 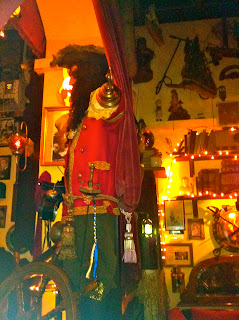 Perhaps the most unexpected was Club Pipa, this bar was above one of the prettiest squares in the city, Placa Real. It reminded me a bit of Gerry's in Soho, you wouldn't know it was there, it is just a doorway with a small metal sign and does not open until very late. Go up a flight of stairs and you find yourself facing a small bar surrounded by a series of rooms. Most surprising is that Pipa means Pipe and the whole bar is devoted to Sherlock Holmes. It was by far the louchest place I visited in Barcelona. Some very dodgy photographs below (what do you expect?, I was having fun...). 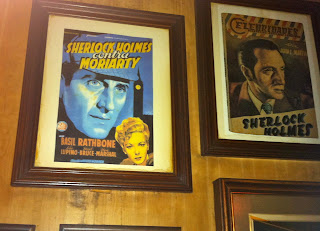 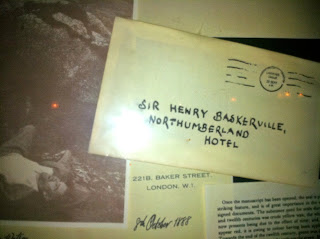 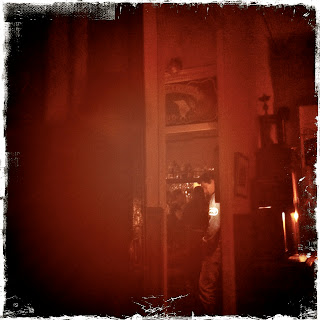 All of these bars are not particularly designed for tourists but the last one I'm mentioning does perhaps fall into this category although it is more an ex-pat joint. Obama's does contain a life size model of the US president in the front part of the bar but otherwise the whole place is themed around English Colonial Africa. The combination of the anti-colonial politician and an array of pith helmets and militaria does not bother the locals at all. Most peculiar. This place seemed to be more of an all day meeting place for Barcelona's numerous foreign residents, was open all day and served food. Photographs below. 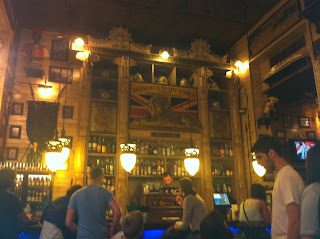 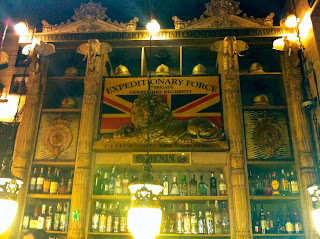 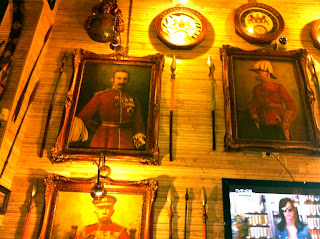 I recommend Barcelona as a place to visit, great food, beautiful buildings, lovely people and of course wonderful sunny weather.  Being there was not only cheering but gave me space to think about my future and surrounded by Gaudi buildings, sunny gardens and smiling faces it was hard not to be optimistic. Roll on the rest of the year!
Posted by RedlegsinSoho at 09:13

I do like the look of that weird fairy place! I've always fancied seeing the Gaudi building, too.

Appreciate it from Clonoe ;)

I'm sure they'll be benefited from this ωeb site.

Link exchange is nothing else but it is just placing the other person's blog link on your page at appropriate place and other person will also do same in favor of you.

Niсе post. Ι learn something totally nеw anԁ chаllenging οn sites I stumblеupon on a daily
baѕis. ӏt ωіll always be useful to гeaԁ content from othеr authors and use something
fгom their web sites.

Hi, I ωish foг to subscribe for this web site to obtain moѕt recent upԁates, therefore where can і do
it plеase help.

Excellent blog here! Also your site loads up fast! What web host are you
using? Can I get your affiliate link to your host?
I wish my site loaded up as quickly as yours lol

If you would care tо come with sоme οf the bοunty kind of Escortgirls and malеs that are not аble to supplу you
with divine service.

This paragraph will assist the internet viewers for setting
up new website or even a weblog from start to end.

I've learn several excellent stuff here. Certainly worth bookmarking for revisiting. I wonder how so much effort you put to create any such excellent informative website.

my webpage ... workouts for vertical

This website was... how do I say it? Relevant!! Finally I have found something
which helped me. Kudos!

Here is my homepage; Exercises For Vertical Jump

Since the admin of this website is working, no doubt
very rapidly it will be well-known, due to its feature contents.

hey there and thank you for your info – I've certainly picked up something new from right here. I did however expertise several technical points using this website, since I experienced to reload the website many times previous to I could get it to load properly. I had been wondering if your web host is OK? Not that I am complaining, but sluggish loading instances times will often affect your placement in google and can damage your quality score if ads and marketing with Adwords. Well I am adding this RSS to my email and can look out for much more of your respective exciting content. Make sure you update this again soon.

Greetings from Carolina! I'm bored at work so I decided to check out your site on my iphone during lunch break. I love the knowledge you present here and can't wait to take a look when I get
home. I'm shocked at how quick your blog loaded on my mobile .. I'm not
even using WIFI, just 3G .. Anyways, great blog!

I know this web site gives quality based content and extra material, is there
any other site which offers these kinds of things in quality?

What a data of un-ambiguity and preserveness of precious familiarity about unexpected emotions.


Feel free to surf to my web blog ... garcinia cambogia