Bad times may be just around the corner - but we could just cheer up!

Various controversies rage and then go away and rear their heads once more. Body image, sexism, ageism are things that are like an itch, we scratch ‘em but they keep on coming back. The problem is that in seeking to find a plaster for every sore we often miss the point and in my case there are always a lot of ‘sore’ points. In the general scheme of things our gripes as  western woman are indeed minor compared to our sisters in more difficult regions of the world, on the other hand those women are not what we should be comparing ourselves to. We should compare ourselves to the situation of blokes, here, in our own country.  But we don’t, we compare ourselves neither to less privileged women nor to everyone else but to each other and then find ourselves lacking. 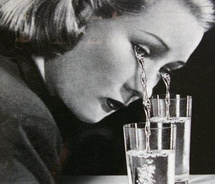 Time perhaps to stop hitting ourselves over the head, to stop being miserable and to stop sharing our miseries automatically and electronically with the whole world. It should be share the love and laughs, not share the angst and ennui. I’m not referring to when things go really pear shaped and a bit of a rant, a few tears or bit of sympathy from your mates is required. I’m also not talking about clinical depression or bi-polar conditions. These are ironically more common than our parents or our grandparents would have admitted yet actually far less common than we think. A very few of my friends suffer from these and they know who they are. I am becoming a bit frustrated at a fashion for misery in those who are really just, well, living life. Because, like most fashions it rubs off and really, as so far this year has been a bit rubbish I could do without it. We all have to deal with real causes of unhappiness, illness, bereavement and broken hearts. Why freak out over life in general, our looks and our perceived ‘lessness’? Could we not be magpie like and select some vintage attitudes to match our best frocks? I am of course cherry picking here but why not? We cherry pick the positive things stylistically from the past all the time.  So here goes, inspirations to ‘woman – up’ from the past, I would be interested in anything anyone would add:
The 1910’s.  The Suffragettes saw being feminine and feminist as flip sides of the same shilling. I think they would be horrified to see young women starving themselves on purpose for their looks when they were on hunger strikes or being force fed for equal rights. We need to register the fact that the current government are very particularly attacking women and get angry about that, not the fact we have bingo wings, are not slim enough or have the odd wrinkle. Being a woman is a bloody good thing to be, adjustments not required. 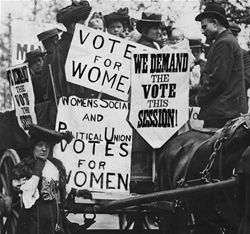 The 1920’s.  Mass unemployment, depression and the realisation that industrialisation and capitalism could make you poor as well as rich. But it was also an age of speed, of deco, of style and the Charleston.  Sod constantly worrying about mortgages, salary freezes, lack of promotion and austerity, pour a drink, put on some jazz and dance. We have the whole world to listen to and dance with. 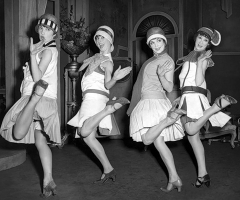 The 1930’s.  Most women still lived proscribed, limited lives as household drudges. But the movies and their stars offered glamour and escapism and it began to rub off on female expectations. Heroines in films were sassy and even ambiguous.  Finding your man was still important but being a journalist, a writer or an artist was also desirable. Using your brains and your talents still is, more important than glossy locks or a toned botty. Women in the 30's dreamed of escaping, we have every opportunity to do so. 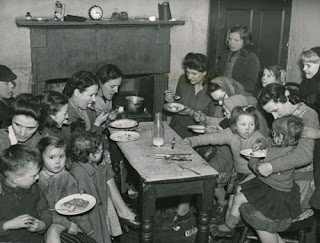 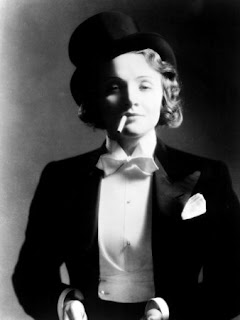 The 1940’s. War, deprivation, death, rationing and possibly the most miserable period possibly to be alive in and what did our nans do? Rolled up their sleeves, put on their red lippy, danced to Glen Miller and fought a war. All we have to do is stop whinging and stop allowing ourselves to be down trodden by elements who, to be quite frank, are a lot less intimidating than the Nazis. 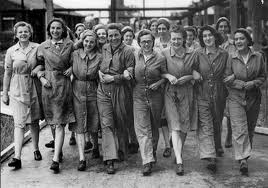 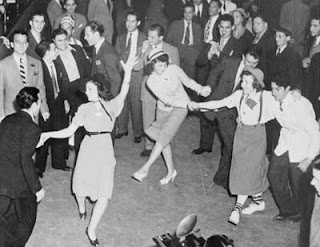 The 1950’s.  Society tried to put us back in our domestic box. But even the WI rebelled over rationing and government strictures. New fridges and ovens turned out to be helpful but really not enough to fulfill women who’d built bombs and put out fires. Jazz clubs, rock n roll, teenagers and beatniks appeared.  Proved that if you have the chutzpah you can wear a big fluffy dress, a bullet dress and still kick ass. So why are we now apologising for our femininity and allowing ourselves to be either coerced into fabric coffins or dressing our daughters up in a million shades of pink? 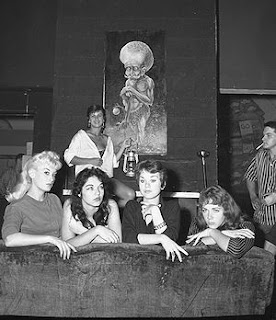 The 1960’s. We may have been over sexualised but at least it was our sexuality. The pill gave us the chance not to become mating machines and the legalisation of terminations gave us some choice over our futures. Don’t fall for the biological clock myth and become a mother if you want to, or not.  All this deranged depilation, obsessive tweaking, branding and face carving is a sign that certain interests want us self-hating. Why sneer at wags and ex-glamour models when there is so much else that deserves a bit of hate? Female mutilators and people traffickers for example? 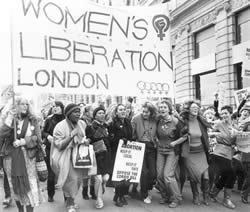 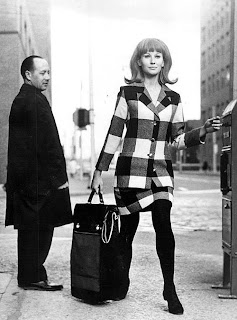 The 1970’s. An age of Watneys beer, sexism, violence on the terraces and power strikes. Yet the period also say women running governments, Golda Meir, Indira Gandhi and Margaret Thatcher.  The chance to slug beer from the bottle, wear big boots, pierce your nose and stick your fingers up at anyone who didn’t like it was grasped quickly by some. But although it seems like some kind of Gene Hunt peopled nightmare decade it also saw a steady increase in female presence in almost all spheres accompanied by a Spare Rib tendency to shout at inequalities and a stoic strength. We spend so much time looking inwards we are taking our eyes off of the ball here. Glass ceilings, lower salaries, sexual harassment and lack of representation in business and politics are not what women in this decade anticipated 30 years on. 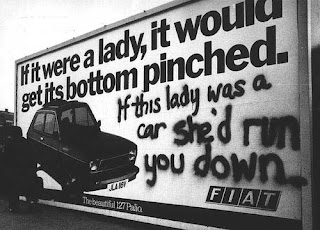 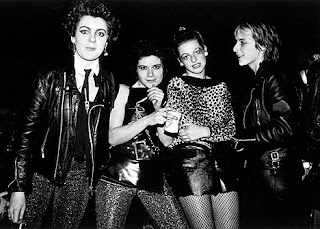 The 1980’s. Two major recessions, the Miners’ and Dockers’ strikes. Things were grim in the 80’s. At the same time they were wildly imaginative, you could go to a party as a pirate, a nun in a see-through habit or just yourself.  Alternatively you could wear a pie crust blouse and pearls or arrogantly swig champagne in your power suit. This was not a homogenous decade, we were not all scrabbling about trying to be super yummy mummy and professionally satisfied employee. Talk about making a cross and then crucifying ourselves on it. 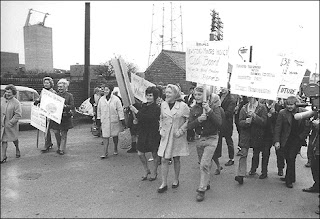 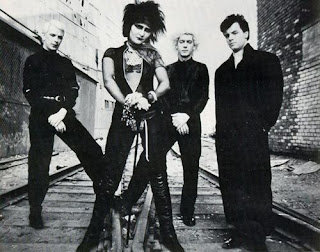 I’m not sweetness and light and fairy cakes myself but perhaps it does come with old bag status; the acceptance that whilst life can be rubbish it is also rather wonderful. I think that perhaps in the early 20th century the sense of entitlement that seems to be a problem now wasn’t there as much. This entitlement has been creeping up on us slowly since the 1960’s but seems to be virtually epidemic now. We don’t have a right to happiness or anything else. But I have always agreed with Buddhists in suggesting that we owe it to ourselves and others to make as much happiness as we could. Our predecessors did not accept their lot, but whilst enduring it seemed to make the most of what they could. So rather than enhancing my sense of self- worth or content via vintage style and looks in this post I am proposing a bit of vintage/retro 'get – happy'. I apologise if I sound a bit like a preachy Jehovah’s witness! Also this has been a bit gender-centric but to be honest that is because the chaps, to their credit, don't tend to subscribe to a lot of this self loathing. 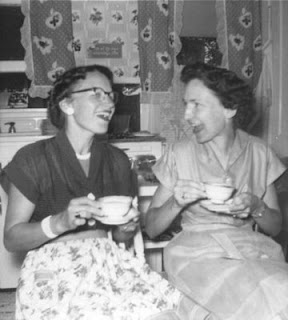 Well said! Absolutely agree. It drives me crazy when I see people constantly moaning on social media about this and that, all pretty trivial in the grand scheme of things but it does seem to have become a fashion to moan and share too much!

I haven't had a great year so far, suffering with pain, waiting for the NHS to pull it's finger out and instead of moaning about it, I've actually stayed away from social media a bit as I'm a right grumpy git when in pain, irritable and no fun to be around! However now I have pain meds sorted I'm BACK!!

We should all try that happy face, it helps as much as having a quick rant :o)

I went off into a happy place as soon as you mentioned nuns in see-thru habits.

You've been looking inside my head again, well said. Find myself frequently muttering "Emmeline will be revolving!"

Well written post! I agree with you. We are stronger if we rejoice in being women and make the most of what we have! I don't mean we should be complacent about unfairnesses, but like you say, pointing the finger of blame at ourselves or what we deem to be "the wrong kind" of women is getting it all wrong! I've also thought back to the strong-minded and determined women of the past, who may not have had a lot, or had a lot of opportunity to realise themselves but who made the best of everything and put their best foot forward in the process! Cheers to that. Lina x

This is one of your most interesting posts. I find often that wise and fun spirit in rookiemag, rather than vintage blogs, and I don't care if it's aimed at teenagers!

I say, spot on! What a marvellous pep talk to find on a Sunday morning. I'm going to file that and re-read it whenever feeling a little down in the dumps : )