Jane Austen a go go: dressing for a Regency ball.

From the sublime to the ridiculous, in vintage era terms. One weekend I am poncing around in fake leopard skin and victory rolls, the next I am fannying around like..erm…Fanny Price. Right out of my comfort zone and into the Regency period. I was attending the Oxford and Cambridge Club’s Regency Ball. It imagined an event held for Wellington in 1805 and was held in a building that although built shortly after the Regency posesses much of that period's architectural and interior styling.


Now don’t misunderstand me, I like the period, in fact I studied it's art way  back in the past as an undergraduate.  The finest place I ever lived was a high-ceilinged Georgian flat in Bath. Stylistically I regard it to be a high point in English design, art and literature. What’s more we beat the French when they were at their most stylish and impressive. Even in terms of fashion it has to be said that the men looked good, in fact very good, I’d go as far as saying they have never looked better. Just picture Mr Darcy, or a dashing  Sharpe to your rescue: all that frogging, those tight breeches, Byronesque curls and elegant jackets. Hmmmm. However it has to be said the female fashions of the time worried me. Low cut necklines I can manage with confidence but the empire waistline is a fearsomely unflattering shape on all but the most winsome and willowy. Also the pretty little ringlets, the simple necklaces and the lack of red lippy filled me with concern. Ironically for a period marked by feisty heroines and proto feminism it all seemed a bit prissy. However the night itself proved to me that with tweaking the look was anything but twee.


I knew a few of my guests were ardent re-enactors and being aware of the rapidity with which some 'vintage' types get sniffy I thought I'd best make a bit of an effort. Sadly the High Street didn't provide anything that could be adapted and I cannot sew so I decided to see if the re-enactor community could help. First off I had to do some research, I discovered that white gloves above the elbow, matt if possible would be required. That short sleeves were usual, that a pale shiny fabric worked best with candlelight, although as an older woman I could carry off richer more dramatic colours.

Earrings needed to be wire, not studs, gemstone crosses were a craze and a modern balconette would emulate a corset from the period easily enough. I invested in a simple reproduction dress from Marion May and decided that, if I was leaving my comfort zone this much I should really do it and chose a pale Cambridge blue silk and nail my university colours to my, erm, bra. The service from Marion May was excellent and I received my made to measure dress a few weeks later (I’d recommend her to anyone). It was an interesting thing to wear, despite being unstructured in some ways it had a convenient internal tie for tightening under the bodice and the fiddly little buttons at the back required the help of someone else to dress. I added a paisley style pashmina as a wrap as apparently paisley wraps were also popular. My aim was to look like a provincial lady rather than a duchess, more Jane Austen than Josephine. Hair was tricky, I plaited sections and fastened them up in what I hoped was a Grecian manner and curled the front with perming rods. They were nice and tight when I left but predictably drooped very rapidly. If I did this again I would go for a more structured style.

I’m still not convinced by the result, however the dress was rather comfy, as were the ballet slippers. The effect was quite girly for me which I suspect led me to unconsciously revolt by drinking rather more than I should have, being a bit too loud and while trying, half-heartedly and very badly to dance I kicked one of my slippers into the air. Whoops. But what became clear was that when the empire/directoire/classical/colonial influences were allowed to kick in the fashion of the age becomes less spriggy and bonnety and rather more luxurious and louche. If I wear the dress again I would re-trim it with stronger colours and I would love to wear a tiara-like thing of a big feathery turban like Lisa, one of our party. I should have also have had a reticule, a small pouch-like drawstring bag and would make one myself, with a tassel. The Georgians knew their way around a tassel.

The ball was excellent fun, most guests had made a real effort so I was glad I had but I must admit my own guests were superbly turned out. We started out in the Waterloo Room of the East India Club, where news of Wellington’s victory had been passed to the Prince Regent. Upon reaching the O &C film of charging hussars was projected into the lobby effectively and dramatically setting the scene. To be honest the interior didn’t need much help, but careful lighting and some fun ideas helped. The champagne reception and dinner were welcome but the squeaky frogs, jars of sweets and skulls in the hell fire club stick in my memory. Everyone seemed to be having a good time and the other guests were friendly, including the two ex-Mayors of the City at the next table who had had no problem finding suitable outfits in their wardrobes. We were eventually thrown out in the early hours quite happy, although the following day found me feeling damaged to an extent that I don’t think would have been respectable during the period. I hope someone invites me to another evening event for this period (hint, hint), I promise that I will behave and steer clear of the dance floor by claiming gout or something. I'll even get Torquil into breeches! 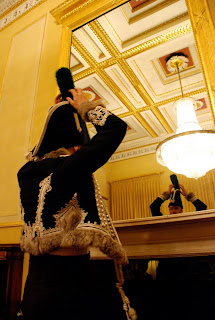 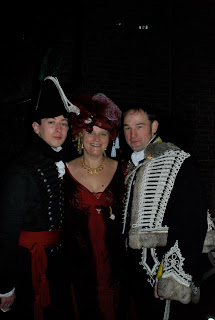 Oh wow, this looks amazing! And you looked wonderful in both this post and the one you did about the Dandyist ball.

I was never really into the Regency period, but it's fun for a change from red lippy - I went to such an evening a while back, think I even posted about it too (hang on, let me find it...
http://vintageburlesque.blogspot.com/2010/06/jane-austen-adventure.html)

I think if I ever get married I might inflict an Austen-themed hen party on my friends.

That looks like a tremendously fun event, and your dress is gorgeous. I wish people saw more of the fun of the Regency - working in Bath, I get to see the very worst 'assumed twee' side of it. Let's hear it for the chaps who'd down a bottle of port a day and the ladies who stayed up playing cards all night!

What fun, it looks marvellous. The Regency is not my favourite period but it does fascinate me...I would love to go to Bath...and you are so right about men knowing how to dress then. I love the costumes in the Vanity Fair series, Becky wears a most fabulous red riding habit, makes me want one, badly!

For some reason though, when I look at the women's dresses I feel terribly cold. I don't know what it is, but I always shiver and think they must have been freezing half the time, I'd want several vests myself.

Such a neat event! And you guys WERE dressed to the nines. Great work!