Some of you who know me personally are aware that I am far from being a homebody, my efforts to knit have been pointless as I lack the patience, I'd like to be able to sew but am intimidated by the effort required to learn. I find baking to be a waste of time although perversely I am more than competent, it is just dull (unlike eating which is positively exciting). I can even throw a pot as well as a tantrum however none of this will help me to dress myself in things I have made, my sole talent being basic embroidery, which you cannot wear on its own. So it was quite brave of me to attempt to make a hat considering my grade  A level in cack-handed sewing. However I could not find the kind of hat I wanted: not a fascinator, not a little feathery thing, not moth bitten and not £200. So I decided to dip my toe in a little very very basic amateur millinery. I was helped by the fabulous Georgina at Atelier Millinery who gave me advice and equipped me with the basics, which you can see above. 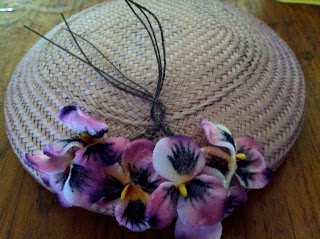 Step 1 was to sew a few pansies around the hat just using a robust sewing needle and cream thread. I was planning to wear it at a tilt and concentrated on one edge.
I am not sure the effect is quite what I wanted, perhaps it is a little fussy or would be better with some net veiling. Also it was a fiddly job although it only took me a couple of hours. This is the reason why, money and time permitting using a professional milliner is the way to go. Really this wasn't hat making so much as assemblage. On the positive side there was nothing in any mass retailers that had the same feel and there is the opportunity to pick colours and trimmings to fit your own sensibilities. I love pansies, particularly mauve ones and although I could have done a better job it doesn't look too bad.
Posted by RedlegsinSoho at 06:57

It's a sweet thing, I like pansies too and love the buckle detail.
I find myself more and more frustrated by being utterly incapable of doing things with my hands, specifically things of beauty. I am aware it is a skill that could be learned, if only I could master my lack of patience first.

I love it, those pansies are so sweet and I think it looks great on... jealous x

It looks great! I'm a professional milliner, and your design looks lovely. I love the buckled grosgrain.

Minn, that is amazing! xx

That is really rather delish. I have a passion for velvet pansies and violets. I'd love to do a millinery course.

A charming lady in my village is a milliner by trade. Such endeavours are to be applauded!