‘Oh, my only true love, darling. I live for furs. I worship furs! Aaaah…. After all, is there a woman in all this wretched world who doesn’t?’ Cruella De Ville

‘Get a feel for fur:  Slam your fingers in a car door.’ Audubon, November 1990
There are seven perennial subjects which never disappear from the vintage world: red lipstick, the search for bargains, hair that won’t curl and fur. I was interested in this and several other bloggers have written good posts about the subject. I direct you to Retrochick: on wearing vintage fur and Rockalilly on demonstrations against fur outside a vintage shop.
It’s an emotive subject and so I added a little furry section to the vintage survey. Before I continue I have to  nail my colours to the door. Personally I find many fur coats repulsive and cannot justify wearing small animals bred for decorative purposes, having lived in Asia I have no illusions about how most of the world’s fur is produced: vilely. However I am an omnivore and don’t feel I can draw the line at coney and horse and deerskin when I would happily eat the creatures and wear leather. So I feel a little wooly.and  resemble the  vegetarian who eats fish (or a fish and hypocrite as my friend Dooj describes it). It isn’t clear cut. I find old fur is often smelly and dislike the beady eyes on fox stoles.

Yet even I have to admit that fluffy fur  in itself is a beautiful substance and  a vintage Mae West looks sexy in hers. Until recently in many countries it was your only option in the freezing cold. Also how can you justify destroying fur, if you can't do this what do you do, hide it in a cupboard or wear it? My mother  sensibly gave all her inherited mink to a charity to be used for blankets  Then again, I eat foie gras and have a thing for very bloody steaks so who am I fooling?  But I really do draw the line at budgie hats and chinchilla coats even if Cruella De Ville is one of my style icons.  In effect I never buy vanity fur because I am not sure and that makes me uncomfortable wearing it and I wear vintage clothes for pleasure. I

Ultimately though I may carp and argue and wrestle, but the one thing I will never do is tell someone not to wear it. Neither my business nor my right, nor anybody elses.
Survey Results.
Here are the results from the survey, incidentally the response counts to the questions was variable and ranged between 91 – 95 % so a good response. I just wish I had the wherewithal to ask the ladies and gents separately. 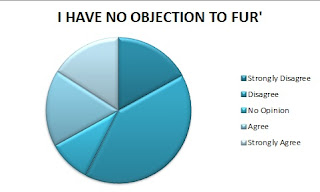 It would seem from this that the larger number of respondent actually dislike fur.... 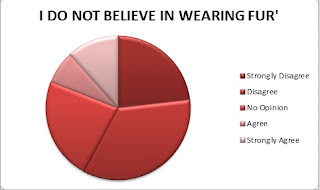 However a look at the above diagram indicates a similar if not stronger percentage who do not mind or approve of fur!
This may be the result of two things; people not reading the questions (designed to eliminate an element of bias) properly, badly designed questions (ooops) or a general ambivalence. The people responding to this are bright (my bias!) so I suspect the latter. As people who might vaguely label themselves 'vintage' are in a sense 'alternative' there might be a reluctance to firmly place themselves in one camp or the other. 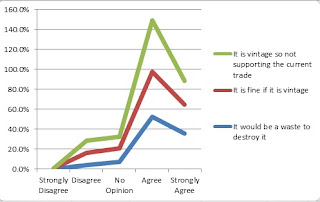 Some of the questions attempted to gauge whether those that are happy to wear fur are influenced by their vintage tastes. It would seem so, most agreed that it's destruction was wasteful, logical really as even those who are anti-fur would agree that one reason for this is the waste of animal life and resources that go into fur farming. Many felt that vintage fur was in addition a different material from the modern variety. Perhaps we shouldn't apply contemporary morals to a coat that was produced in different times, when artificial alternatives were not available? The counter-argument is of course that fur in the west was a luxury substance rather than a necessity but this is leavened by the fact our grandmothers may not have been as aware of the issues, or that in those times there were different priorities. Many also felt the vintage fur trade does not support the modern trade, which financially it obviously does not. In fact the might the availability of cheap vintage fur dissuade someone from buying new? 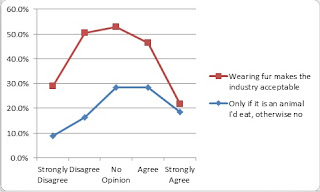 .
I am, like some of the people in the graph above not convinced by this, probably because I think if one of us goes outside looking good in fur it may persuade people to buy it. It is a moot point however and I would be interested to get some comments or opinions on this. People did not particularly share my scruples about hypocrisy; that if you eat something you should be prepared to wear it although some did.  Again I would be interested in canvassing opinions.
I suspect in conclusion that a more general survey might have picked up a more negative response to fur., who knows? I don't believe that means the vintage community are less caring but that possibly their love of old things and the history of clothes perhaps overrides some of the scruples others might have. On the other hand it may be a reflection of the tendency to not be swayed, either way, but contemporary mores. It certainly does not reflect an overwhelming tendency towards reactionary attitudes, as, I can leak in advance that the survey revealed a wide range of philosophic leanings with a bias towards liberalism.
My own suspicion is, despite the efforts of the fur trade, the wearing of fur will slowly die out in modern industrial nations apart from trimmings. To pick on fur alone is to ignore the damage caused by cotton farming and wool production. I'm not a fur wearer, but amongst vintage types I am in a largish minority.
Were you surprised, annoyed, reinforced by these results? It would be interesting to hear, please comment. I know it is an emotive subject but an intelligent debate can never do harm....
Minn x

I was one of the relative hardliners--I think fur is gross. I do agree that vintage fur is much, much less objectionable than new stuff, but wearing fur of any kind does send the message that killing animals for their skin is okay. I also think there's a difference between someone wearing leather and someone wearing fur--leather is the default option for shoes/bags, and I don't think we register it in the same way we would a mink coat. Although that said, I don't care for long leather coats either...I wouldn't necessarily protest a vintage shop, but I think wearing fur of any kind is an assertive statement, and it's one I don't agree with.

I am a happy fur wearer, I can understand why some people have a problem with it, that is their opinion, I respect that, but if I can respect theirs, I automatically assume they can accept mine. I only own vintage fur, I wouldn't buy a new fur. I remember that one day someone enquiring rather pointedly if my coat was real, I replied with "yes, it is. It's also from the late 1950's. I can't do much to save it's life now, mouth to mouth doesn't work on a fur coat. Its been dead longer than I have been alive" I guess my point is that by wearing it I am sort of preserving its life a bit, its still being loved and its still gorgeous after 50 years.

I love the feel of fur and will happily wear vintage fox or contemporary bunny. But I am also a medievalist and to do that accurately you need fur. I'm putting together a cloak lining with fox fur at the moment but it's from a 60 year old coat that I pulled apart. Tina

I think you may already know my views on new fur (from B&G).
Aside from the gratuitous barbarism, I think it makes the wearer look like a gloating, amoral savage.
I have no view on vintage fur from a moral standpoint but, then again, I have no view on the wearing of the skin of long-dead humans. It's simply not something that I find tasteful.

It depends really. I for one find a mink coat unjustifiable yet not using rabbit fur from rabbits killed for eating unjustifiable as well. If we are going to kill an animal to eat it then we must use all its parts, including the fur, in order to justify killing it. Wasting parts is, IMHO, disrespectful to the animal who died for our human sake.

Another thing is if the animal in question is a pest. In NZ, the possom is considered a pest and you are actively encouraged to kill them. Now in this case, you're not going to eat them yet the question remains as to why you can't use their fur for something useful?

Regarding alternatives, well, we have fake fur made from acrylic which does not compare to the real thing TBH in terms of how it traps heat, its feel and how it repeals rain etc hence why the eskimos or whoever have not discarded using it in spite of modern alternatives. Also, if we are talking about ethical considerations the fake fur is more damaging to the enviroment being non-biodegradable and requires oil to make than the biodegradable renewable fur. The argument runs many ways.

Regarding the ethicity of how they are killed, it is a whole different debate I feel as it refers to individual jurisdiction and practices of each country.

Very interesting! I do own some vintage fur, both coney. When l posted pics l was targeted by an anti fur person, who resorted to name calling. Not acceptable. Each to their own. I don't think that new fur is okay. But its been dead for years, me not wearing it isn't going to change that.

Scott Brown These are all good reasons to have gym college
algebra in school and everything else going on in my life.

The categories in between are: established middle
college algebra; technical middle college
algebra" was always a construct of ideology, indeed the expression of a dream. One of President Reagan's praiseworthy achievements was the Tax Reform Act of 1986, a bipartisan reform that reduced marginal income tax rates while increasing the tax base by taxing income sources other than earned income.

There is little doubt that Obama's team could not resist the opportunity to harness the energy and valuable elements it contains.