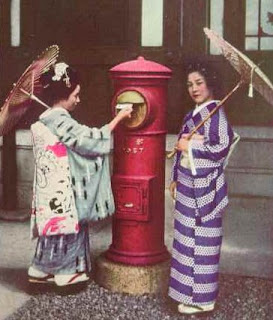 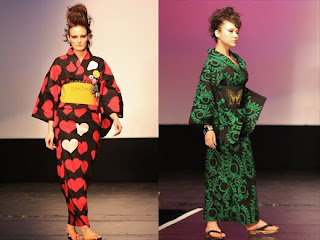 And now....not a lot of difference really.

I lived in Japan for a considerable time, close to a decade and during that period I had several run-ins with the Kimono. 'Run-in' is not quite the right word as I chose to study kimono, or rather the practice of wearing one. Which since I have no co-ordination, zero talent for tying knots and swear a lot proved to be foolhardy. On the other hand I was for various reasons expected to wear one on occasion. I persevered with the classes, provided by an elegant widow and her charming friends for a couple of years, partially because of the company. I found older Japanese women, away from the men to be earthy and funny. I missed the company of women. As a foreigner however I did have to fight against the Japanese tendency to get carried away by the concept of a foreigner in their native clothing and to subsequently dress me up like a dolly. The first thing I had to get the hang of was the furisode, the full-on long sleeved ornate kimono designed for teenagers and unmarried young women. I was neither. I generally managed to get away with wearing a dark one at least. I ultimately bought a more sensible tomesode which better suited my age and status, with shorter sleeves, in a soft sage green painted with flowers it suited me far better. 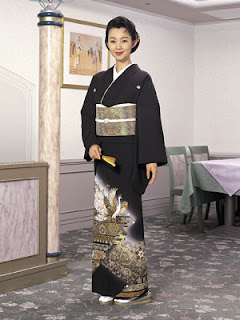 Elegant tomesode type kimono.
Kimono are very simple articles in themselves, but the underthings and the method of wearing them, not to mention the etiquette is complex. Some accuse the Japanese of complicating simplicity on purpose. I don't think this is fair. As much part of the mix is a joy in the process of dressing as an activity and in dressing up in an exceptional way. Something that any retro-orientated lady can appreciate. 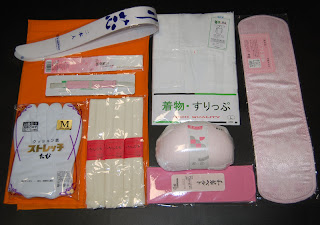 A set of just the basic underpinnings for a kimono, I had a small suitcase full.
The underpinnings can be quite inelegant. Amongst the reams of plastic clips, strips of plastic and sheets of laminated board I saw old towels, cotton wool and even sanitary pads utilised as body padding. As you work up from kimono undies, to plain cotton under-kimonos, to silk ones things become exponentially more luxurious. The aimed for result is sleek, elegant and tubular surface; designed to show off the Japanese woman's traditional straight up-down shape. Japanese women are historically rather boyish, their physical hotspots are an elegant long neck, a slim wrist or pretty small feet. The kimono is designed to highlight these attributes. It is less successful on a curvy westerner, although fortunately I do have a long neck and slim wrists. I was never sure it looked particularly good on me, although often the associated hairdressing did. The Japanese are masters of the up-do. I also appreciated the help with my posture, the obi (kimono belt) is a firm construction and holds your back straight. 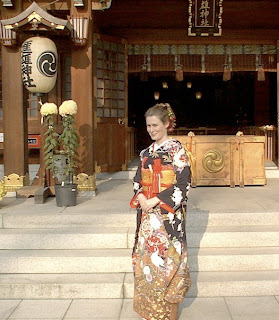 Yours truly in her Sunday best.
The historical oddities of the kimono made it fun, the purse worn tucked in the front is for medicines/narcotics. Several times I had to wear an ornamental small dagger, once upon a time it would have been far from ornamental as Samurai women were handy with daggers and expected to defend themselves. Wear a kimono fastened over the wrong side and you are apeing the dead; someone will very rapidly run up and refasten it for you which can bewilder unsuspecting visitors. Collars that hang down the back too low have an element of the loose and fast woman about them. Lots of other things amused me too, like the young woman who once secreted a half-full bottle of wine in the long sleeve of her furisode as we left a formal event. It joined a packet of cigarettes and small box of condoms.
I wore the summer kimono or yukata a lot. It can best described as the cheap flirty sister of the formal kimono. Inexpensive, they come in a wonderful range of designs, some entirely frivolous such as the 'flying hotdog' pattern or ET emblazoned ones that I saw in Tokyo. 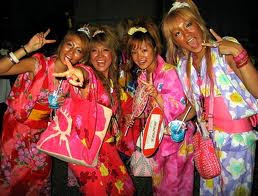 'Ganguro' girls display how sub-cultures make traditional dress their own, note the freebie fans.
The yukata belt is quick to tie and the reasonable cost means it is possible to own several. As a garment it is suitable for the stifling heat and humidity I used to endure in the summers. Made in light cotton it has an open space under the arms and a fan can be tucked into your obi. There is always a fan to tuck in as most summer festivals see companies giving them away by the dozen. My favourite came from a good Korean restaurant. Problem was everytime I fanned myself I experienced the need to eat spring onion pancakes. Yukata are very flexible stylistically. I have one that is covered with lucky chinese cats in a range of willow pattern blues. I have a more high quality example in a very traditional white and scarlet graphic pattern and finally I have my 'goth' version: black with fireflies and a wide purple and black obi. Rules are not followed slavishly with Yukata, they can be punked up or subverted. They also look good on the boys, who tend to buy them in a more conservative palette although the odd dandy will step out in dragon prints and sunglasses. 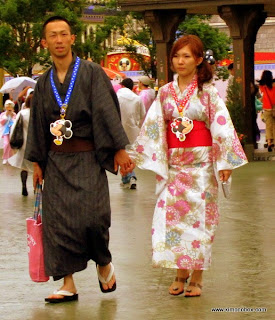 Couple strolling through Disney theme park in their yukatas.
I do miss the opportunity to wear these, what is a practical outfit in Japan is fancy dress here. My formal kimonos rarely escape their paper wrappings and wooden boxes. Quite apart from the terror of spilling something on one I am not sure after all these years that I could remember how to fold one up properly. But it was a pleasure to wear one when I had the chance.... 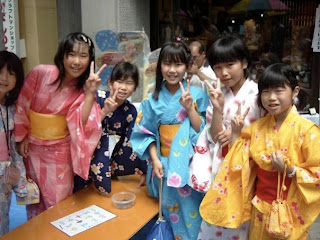 Girls dressed in their summer yukata.