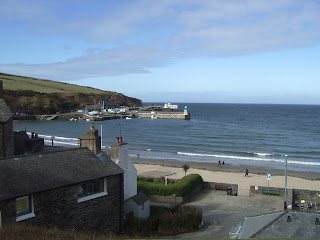 My lack of blogs recently is partially explained by a trip to the Isle of Man, even I didn’t feel the need to drag my laptop with me, although I admit for a nanosecond I was tempted. I was going to attend, what turned out to be a charming wedding. However as the Isle of Man is a rather longer trip than the usual be-hatted excursion to Surrey we had decided to stay for 3 nights. As you can imagine, small islands in the Irish Sea are not Red Leg’s native habitat. I am quite literally a fish out of any water that is not redolent of the Thames: grey and murky. I’d also never been to any of the Channel Isles so had no idea what to expect, except hopefully good fish and chips and salty characters, a kind of Doctor Martin but in the Irish Sea. 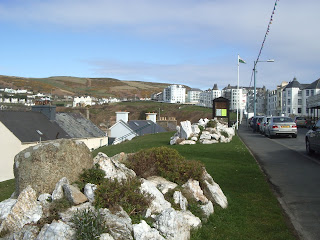 Port Erin without the sea.

The first thing that was appealing was the journey. I’m a long haul traveller having spent an extended period in the Far East. Thus flying on a small aeroplane with propellers had a charm of its own. I had to walk on the runway and climb up stairs into the aeroplane which was redolent of Grace Kelly boarding a plane to Monaco, apart from the fact it was Gatwick and the man boarding before me was wearing a very peculiar wig. Arrival was fun, a blustery runway right on the edge of the Island and a bijou sixties airport that we were in and out of in a jiffy.

We were staying at what I think was the far West of the Island in a little place called Port Erin. It rapidly emerged that being out of season nearly everything was closed and a 30-minute walk revealed all the on offer including it's strangely reticent seagulls. Mind you I am used to Cornwall, the home of the hoodies of the seagull world. Our hotel, 'The Falcon’s Nest' was a curious establishment, Gladstone had once stayed there and it had obviously once been a very imposing building. Like most hotels it had been cut up, ceilings lowered and fire doors added. It however had a breakfast room that looked like a grand Georgian drawing room with high ceilings and a frieze of plaster daffodils. The service was eccentric but friendly. The place did however have the most amazing views of the beach from the hotel bar and a pint of O'Kells beer and a sunset are not the worst ways to see an evening in. 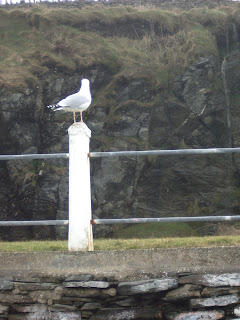 Sorry dahling, no agent no pose...

Soon it transpired that Port Erin was not the quiet spot we imagined, certainly not on that weekend. Quite apart from the wedding party, there was some kind of world viola symposium and the place was full of nerdy foreigners with big instruments. Additionally it transpired that the pub run by the hotel was the social hub for the area’s youth. Unfortunately it was also right under our otherwise large comfortable room.

This apart the Island was a curious place, more redolent of the West of the country rather than the North and very proud. I liked the pride the locals had. Most things were prefixed by the designation ‘Manx’: Manx sausages, Manx breakfasts, Manx cream and on the final day, as a bus driver proudly announced "fine Manx weather". This consisted of horizontal rain and a gale. Curiously the Island didn’t seem particularly well set up for tourism, this was evinced by the available souvenirs: rubbish fridge magnets and fudge or toffee. The local speciality was ‘Manx Knobs’, the most original thing about them being their name (they are basically a type of humbug). I did consider bringing back some of the rather delicious Manx kippers but baulked at putting smoked fish in my hand luggage. 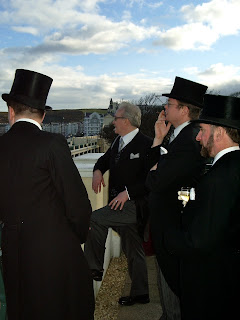 Did I say there was a wedding?

Wedding aside, the high points of the trip were a journey on a steam train to Douglas, and in Douglas a guided tour of the House of Keys (the Groom being a member of this august institution). The train journey was very pretty and spring-like. I noted the response of the local Manx animal population to the train. Pheasants ran around in circles, grouse stuck their heads up and looked cross, rabbits hid ineffectively, their ears sticking up behind hillocks, horses chased us and the only Manx cat I saw promptly showed us it's (tail-less) derriere. Ooooo! I've come over all Country File. Maybe that makes up for asking a Manx man about the land mass in the distance (turned out to be Ireland, duh!). Despite my general rural ignorance I liked the place. I think a touch of seagull coaching in the summer may be called for.

Excellent Minn. Had me LOL. Love the 'manx knobs' (I just meet the knobs, mostly recruitment consultants etc) and the 'what's that land mass in the distance?'. Haha!

Just to let you know I like your blog so much I've tagged you with an award on my blog. x