I’m a bit behind here but finally got around to putting a couple of pictures of Swing for Skin, the benefit Swing night organised to raise money for Debra. This charity raises money to help those who suffer from EB (Epidermolysis Bullosa) a genetic condition that causes severe skin blistering and to fund research into treating and preventing the condition.
The major appeal of this was its location: HMS Belfast. This world war two cruiser class ship saw action during the Second World War and indeed two friends, Catherine and Gemma had grandfathers who served on it possibly at the same time.  Now administered by the Imperial War Museum as a museum with displays about life on board it has been moored between London Bridge and Tower Bridge for as long as I can remember. In fact I recall visiting it with my school, my only memories being tearing around with a clip board and hiding from the teacher. 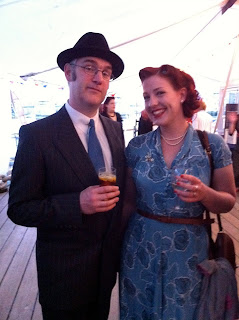 The weather in London had been changeable but it was a relief when it turned out to be a beautiful if gusty evening.  My family come from Southwark/Bermondsey and during the war were busy in a number of roles, my great granddad unfortunately had a very busy time as an ARP/Fire warden in the same area as the Belfast is now moored. One story is of them going into a bombed building to check for survivors and blanching at the sight of dusty dead fingers poking up through the debris – happily it turned out to have been a gherkin factory (Southwark used to have lots of vinegar and pickling businesses). Standing on the deck of the ship with the strains of wartime songs in the background I couldn’t help but recall stories, many not as light-hearted as that.
The evening was good value, our £30.00 ticket included live music, DJ’s (including the dapper Johnny Vercoutre and his charming daughter Tilly) and an afternoon tea with more than enough smoked salmon sandwiches, cake and scones to go around.  The crowd was mixed but characterised by friendliness from the nurses at the door to all those helping including the lipstick and curls girls who were a victory roll manufacturing factory.  My investment in raffle tickets was a good one, although it was the silver snakeskin clutch bag I hankered after I was more than happy to win a voucher towards one of Able Grable’s fantastic dresses.  Organiser Mel and her friends are to be congratulated on organising what was obviously hard work and for the amount of money they raised.
I wore a WVS uniform from the immediate post war period and fortunately I had been to the redoubtable Betty in the afternoon so my hair stayed in place. The uniform consisted of a green dress in a scratchy light wool, so it turned out to be a good choice in the breezy weather.  I suspected I looked like an extra from Cell Block H although a couple of men (you know who you are) commented that uniforms on ladies were rather..ahem..sexy.
Seating was available inside in the wardroom and the museum was open for the first couple of hours. It was I suspect closed down before we all got to tipsy and insisted on climbing into the exhibits. and hugging waxwork mariners. I did hear one confused lady demanding to see a periscope.  The main attraction however was definitely dancing on the decks (or rather watching others dance in my case) with Tower Bridge as a backdrop and tourist boats beeping hello as they sailed by. I always think that London can be a magical place and being on the HMS Belfast to enjoy it was a reminder of those we owe our freedom to do this to.
You can donate money to Debra here. 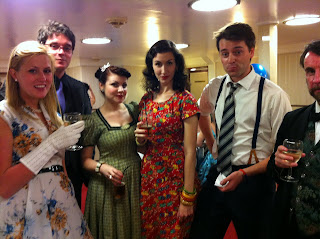 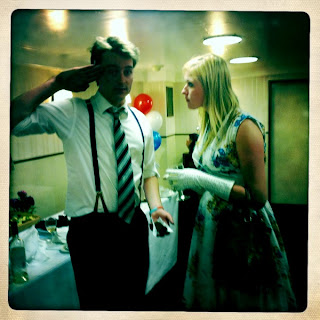 Lovely to meet you and envy your uniform :)

Looks like you had fun- I was watching 'don’t tell the bride' last week (I never usually watch such trash- cough, cough!) and the couple got married on HMS Belfast- Such a great place to hold events. I would love to have been there… well I will either have to find somebody to marry or just go and visit my sister! Tupps x