Shepherd Market.. Mayfair in the rough.

Does anyone else have days when they fancy dressing up to the nine' but have nowhere to go? Of course there are plenty of places to go here in London. Another truism is that native Londoners have a dual personality: they are most at home in their area but have a secondary 'manor', loosely described as the West End. Which is not strictly speaking the West but the central South West i.e. Covent Garden, Soho and Mayfair stopping at Hyde Park corner at one end and Holborn at the other.
Soho is my favourite but Mayfair is a close second and a close cousin. It is really just more loose women, more booze and more misbehaviour but more expensively purchased. It's the best place to pose in your  flashiest frock and hat but can be a little pricey.  To enjoy Mayfair more reasonably however you don't have to descend to the pits of coffee chain and rip off ex Italian cafes with tourist prices. Tucked behind the Japanese embassy is a little mini Mayfair village all of it's own: Shepherd Market (with no 's').

This miniature warren of little streets full of places to eat and drink was originally where sheep were driven to market and like Covent Garden accommodated it's rural visitors with Inns and Brothels. Shepherd Market was until recently still a red light area (all of Mayfair is red lightish now, it has a high number of escorts and up market resident toms politely esconced behind the stucco) and a slightly louche atmosphere still lingers. There are also literary connections, Anthony Powell amongst others has been a resident and the area features in his novels.
During week evenings the character of the area is somewhat compromised by the presence of corporate suits (unavoidable throughout the city) but it has some things to offer including several pubs and is a delight on weekends. The Grapes is the most famous but seems to have gone downhill in recent years. The Shepherd Tavern is fine but I personally like the Market Tavern, it has a quirky interior, decent Prosecco for under 20 quid a bottle and the food is a decent reasonably priced alternative in a pricey bit of London. It is nice at the weekends for a roast lunch. Upstairs, the Chesterton Room essays the past of the area by resembling a stylish tart's boudoir with red velvet seating and flocked wallpaper in fleshy reds and pinks. I had my birthday party in 2010 in this room.
Their are some well known restaurants here. L Artiste'Muscle is busy and atmospheric, a scruffy French Bistro serving steak frites but I don't rate the food or the prices. Le Boudin Blanc is a high end French restaurant, it is ok but also rather expensive.

I prefer L'Autre (020) 7499 4680, on the site of what was reputedly Greta Garbo's favourite London restaurant and serving Polish and Mexican cuisine. A peculiar combination related to catering for the nearby Mexican Embassy in the past. The Polish food is old fashioned and very decent, I'm not keen on the desserts (never am in Eastern European restaurants) but Borscht and Pierogy are available. Service is friendly and the place, unpretentious and full of hats and wine bottles and tiny tables is fun to eat in. Best of all the arsey smug suit types don't 'get it' so generally you are spared the braying. 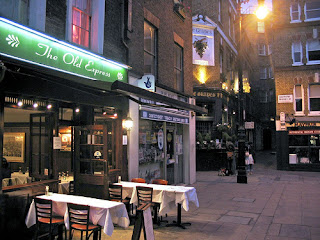 The Old Express, a tiny little restaurant is a good place to take visitors as it serves English food, ie pies, fish and chips. The staff are all foreign but it is a pretty little place and the food is decent. Like all of the restaurants in Shepherd Market, if you can grab one of the limited number of outside tables it is good for people watching.
Like all of Mayfair the area is Araby, and this is expressed by the presence of Al Hamra, I haven't eaten there for years but it was good then and still seems full of Lebanese families so I expect it is still good. For those looking for a bargain meditteranean/arab mish mash there is also a branch of the eponymous Sofra nearby.


Finally although I mention Shepherd market as an alternative to pricelicious Mayfair there are shopping opportunities. For the chaps a toy soldier shop and a  Simon Carter cufflink. emporium For the chappettes danger lurks in several jewellery shops. Finally the area also houses my favourite cinema in central London: The Curzon Mayfair.

If you consider that this corner is within easy reach of St Jame's Park, Buck House, The Royal Academy and Piccadilly you can see it is a useful locale to know and one that non-Londoners and tourists  easily miss. It is very easy to find, go up Green Park towards Hyde Park Corner, turn right up a narrow dirty little road just before the Japanese Embassy and you'll find yourself there!   xx
Posted by RedlegsinSoho at 04:11

I am loving all your posts recently! Have a week ahead staying in the West End & probably would have stuck to old haunts in Soho but will definately pop into a few of your recommendations! Thanks Red Legs x

Thanks for this! I never know where to go when I am around this area! :)