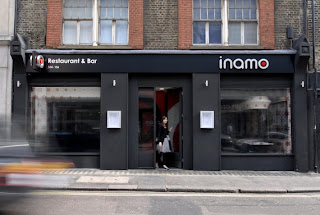 Exterior of Inamo
In Japan interactive electric table tops are not new. My favourite electric game was the one where you had to stab a finger onto jumping frogs, I once saw a salary man get so caught up in killing virtual frogs he jabbed his finger in his soup and then emitted a cry of scalded pain. A similar kind of interactive table top can now be found in Inamo in Wardour Street minus both frogs and salarimen. 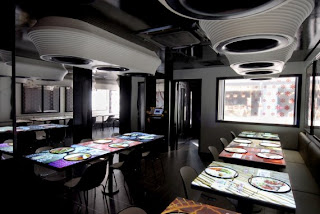 Inamo presents Asian fusion cooking from a dark modern interior where a feature is made of the lamps projecting images onto the tables below. Its fare is classier than its Japanese equivalent and it has a bar in the basement. Upon entering and being seated your first challenge is to order your food, as a waitress demonstrated to us how to use the small touchpad on our right to launch our images I could not help wondering if a menu would just have been easier. It took time to get the hang of the touch sensitive images and you kept on having to faff about to look back at things. Naturally I was going the wrong way about it, I should have just chosen what I fancied, moved it to the pending list and then narrowed my choice down at the end. Duh! However sheer novelty value aside there were advantages, each table top choice showed a description and a photograph which would have made a paper menu cumbersome. 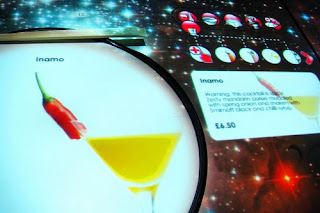 And what of the food? Well the meal started well with my cocktail, the ‘Inamo’ (mandarin puree, spring onion, Smirnoff Black and chilli syrup) which had a dense fruity consistency and a pleasing sting. It also looked pretty against my dark table top, garnished with a ferocious looking chilli. We had edamame. I’m an edamame mama, can’t resist the little things, literally give me a bucket of them and I will consume the whole lot with gusto. Of course these are a healthier beer snack than pork crackling, all that green low sodium legumey goodness. Apart that is, from the fact that, of course they don’t taste quite right without a generous sprinkling of salt. I took Katie Chutzpah who in fine fashionista style opted for the fish options. Her starter: avocado with raw tuna was a bit too sticky for my taste but she professed herself delighted. She followed this with the eponymous Black Cod and was again very happy. The fish was fresh and well cooked. Personally I can’t get too enthusiastic about a dish that I used to have as a Japanese school dinner on a weekly basis but we Brits do like our cod in miso and Inamo is another place you can get it, for a reasonable price. I decided, somewhat contrarily to have the Cinnamon Chicken, this was actually very good. Nice char-grilled meat with a kind of pan asian Cajun feel; the cinnamon working almost like a jerk coating. Lovely. Nicest bit of chicken I have had in a while, well flavoured and a little unusual.

Having eaten it was time to play around with a few of the non-culinary buttons, one was for transport links (very considerate) but there is another with games and puzzles. I glanced around and found several people, admittedly all male, engrossed in games on their table tops. It occurred to me that this could be the perfect place to bring a truculent teenage boy to for dinner. 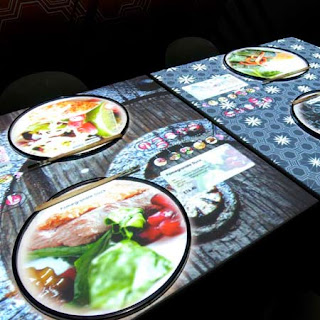 There were things about Inamo that didn’t entirely win me over. I believe that as in Japan, a main course should automatically come with rice and even soup. The fact that the food arrives (and this is like Japan) at irregular intervals meant that at one point KC had all her food and I had none. Also the loos bore signs of it having been a busy day.

However, the bill was for this type of food and location quite reasonable at £60.00 for two mains, four side dishes and two drinks including a cocktail. The staff were particularly patient, pleasant and attentive and once you got the hang of the interactive tables they were a giggle. This is not a place I would go to for a romantic date but it is a fun idea for dining with a group of friends and I think the chaps would enjoy playing around with the table tops (because, simple souls, they do like twiddling with things. I noticed a couple of families with older children who also seemed very happy with the place. I just wish they had a button enabling us to order suave dapper chaps, bearing buckets of beans.

I'll give this place another try, the boy loves buttons.

On three often gets packed with celebrities. Whether
it be the capacity to smoke anywhere, the overall health rewards or just
due to the fact they like using them, electronic cigarettes like V2 Cigs are becoming the new way to smoke.
Keep in mind that v2 electronic cigarettes have goods that demand no
maintenance. So switch to this electronic counterpart and uncover your self leading
a easier life with lesser issues in and about you. Some
cartridges are refillable, but several aren't.