Booze review # 3Connaught Coburg Bar..start as you mean to go on.

Having stated in my resolutions that more cocktails had to be drunk I decided to grab the ears of the year of the Tiger, yank it's tail and then run up a tree. One resolution down. And rather too many cocktails downed..but I won't go into the Who's Afraid of Virginia Woolf like end to the evening, but instead dwell on the civilised start. It is all Sherlock Holme's fault. It was because Baker Street Cinema was sold out of tickets for the great detective's latest onscreen incarnation. Soho was too far to walk so we found ourselves in the vicinity of both Claridges and the Connaught. A dangerous situation as both, of course, have bars. As we hadn't been in the Connaught since it's renovation in 2007 the decision was made, in nano seconds, that a very quick drink in the name of inspection was required. 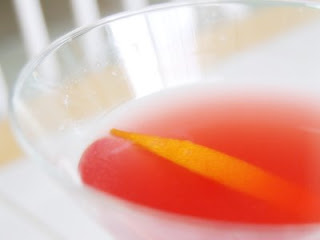 El Presidente cocktail as served at the Coburg.

The Connaught, is often thought of as a kind of sister hotel to Claridges, the racier one? who knows but the refit is not as radical or dramatic as in other hotels to have recent revamps. In fact my criticism is that it is a bit beige and bland and too tasteful in its public areas. Our first intention was to the try the Connaught Bar in the back as it has a glamorous, silvery decoesque look that appealed but that was sadly closed, so we were directed to the Coburg Bar. The Connaught was originally called the Coburg but had to change its name in the light of anti-German feeling during the Great War. This was again a brownish room, but obviously featuring the lovely plastered ceiling and proportions that many of the hotels of this period boast. With large mirrors, a fireplace and elegant edwardian hanging pendant style lamps it could best be described as a room from the 1900s with the quirks required for it to be seen to be modern, but in the way that people who shop in Notting Hill regard modern, ie more old fashioned than it would be if it were old fashioned; if you get my drift. One of the pieces of wall 'art' was some kind of frame draped with fabric that almost entirely matched the scarf I was wearing. I took this to be an indication that I was divinely ordained to have more than one drink. 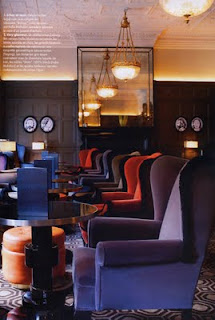 Interior of Coburg (note chairs too short for tables and annoying knobbly bits on tables to bang ones knees on).
The crowd were a mix, some were having drinks before dinner at the restaurant, quiet couples, the odd well heeled tourists, a group of rahs..generally the atmosphere was smooth and calm. Claridges, an innately stylish and excellent bar has to deal with primrose hill trash and city boys, which they do admirably. Seemingly none of this at the Coburg. However it was still, thankfully, raffish Mayfair. The requisite group of Arab gentleman were joined by what a lady who could most generously be described as a good time girl, tall, blond..with that emaciated expensive in your face blonde tartiness unique to Kensington and Mayfair. The Coburg is so classy some of the staff actually pursed their lips and the rather po-faced couple next to the group asked to move. Personally I earwigged and was highly amused by the lady's denial that she had peroxided her hair to the shade of an old office telephone but had whitened it gently with coconut oil whilst in the cCrribean... much to the derision of the elderly gent next to her who looked no fool.
Whilst this people watching continued so did the cocktails, it is a good list including some older classic cocktails, I got the impression that the bartenders could have rustled most requests up had we decided to be picky as they exuded professionalism. It was informative, I had no idea that Dick Bradsall invented the Bramble. We both started with a White Lady, beautifully presented, strong and accompanied by little canapes of fresh fruit skewered onto cocktail sticks they sharpened us up nicely. They did not contain the traditional foamed egg white and were a little too dry, perhaps pandering to the modern inclination for sourness in all things. A White Lady should be slightly sherbetty. But they were pleasant. I followed this with a Brandy Alexander, tasted fine, real nutmeg grated on top but again a problem with texture, Brandy Alexanders are never as creamy as they should be, like single cream, but again there was plenty of booze in the glass. My companion opted for a Dry Martini, which he liked, but perversely, as the previous cocktails were drier than they should have been, the Martini had a touch too much vermouth. I followed with a Kir Royale, the house champagne was Ruinart which I quite like, so I moved on to glasses of that as it is a shame to pour cassis into decent fizz. The bearded one opted for El Presidentes, The El Presidente is a mix of rum, curacao,vermouth, and grenadine from Cuba and was popular from the 1920s through the 1940s. Named in honor of Cuban President Gerardo Machado it quickly became the preferred drink of the Cuban upper class. 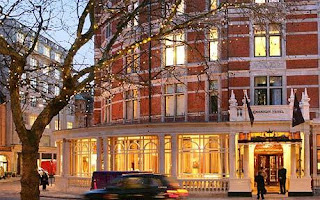 xterior of the Connaught Hotel at Christmas with fairly lights in the trees.
Although I thought the room needed a bit more va va voom, and the cocktails were good but not perfect I really liked the Coburg. It was like being cocooned in a stylish, velvety, chocolately boozy womb. Particular praise needs to be directed at the music played which made you actually want to stay. My pet peeve is luxurious bars playing trashy R & B. None of it at the Coburg, imagine if Lady Luck or the Black Cotton club compiled a chill out album and thats what you had. Rat packy, lounge lizardy, black lady sings the blues and men in fedoras wistfully swirl their whisky type music. The staff were good, spoke English, attentive and not mean with the nibbles. Said nibbles were large green olives and a bowl of paper crisps manufactured using monster spuds..and most distinctly home-made. It was ruinously expensive yet unlike another famous London Hotel bar you felt as if you had received some service and attention.
Looking forward to trying the Connaught Bar, any ladies out there care to join me?
PS: For those who are interested here is the recipe for the el presidente, DO try this at home!
Ingredients:
2 oz light rum
1/2 oz fresh lime juice
1/2 oz pineapple juice
dash of grenadine
Preparation:
Pour the ingredients into a metal shaker (none of that tempered glass rubbish) with ice.
Shake well
Strain into a chilled martini glass.